Every Day In May 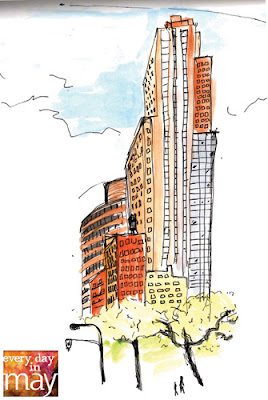 Yeah, I'm a chicken-shit non-committal weasel, so I'm not going to join the actual Flickr group. For one thing, it's downright intimidating over there. But I did successfully complete a drawing today. (well, now yesterday since it's actually 1A on Wed May2, but the drawing was completed before then.)

I went out at my lunch break and stood by a newspaper kiosk on 96th street between 1st and 2nd, and drew what I saw looking West. (If you ever come to New York, you have to remember there's no "north" or "south"; there's East, West, Uptown and Downtown. A few weeks back, two tourists were asking about getting to Central Park from East 125th. Should they go south?, they asked passersby. I stepped in when I realized no one had a clue as to what they were talking about... "South?" a lady asked blankly in return. I told the tourists "Go downstairs and take any train going *downtown*, get off at 96th street and walk West. There is no 'South' here... only downtown". And then I pointed in each of the four directions. When they went down into the subway, the ladies standing next to me started to laugh. "You're right... there IS no "north and south".)

I made a drawing. I will try to keep it up.
Email Post
Labels: Sometimes I Draw

Job said…
i like the new look - if you like purple, you can make the font color purple... ;-P

Julie said…
I just love this - well I love all your work, but this one in particular. There's something about this stretch of street that always catches my eye - it has an energy, a feel to it - and you captured it perfectly.
May 8, 2007 at 9:53 AM