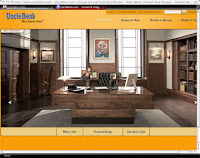 I went the other day and followed the link directly to Uncle Ben's Office. Go ahead, try it. And I realize I'm about a month late on this outrage, but humor me.

First off, it's a great web app and the programmers did a great job. It's definitely cool to explore.

Now, maybe I'm a tad touchy, but what White Chairman of the Board goes by the name "Uncle"???? Or any CEO of any heritage, matter of fact.

So the site is cool, but I'm getting that little prickle I get when I'm confronted with something so slick you can't really nail it, but it pisses you off, nonetheless. Kind of like the "compliment" I've received on occasion: "You're the Whitest Black person I know".

And something I forgot to add when I first posted about this. I have a friend who works at a major Consumer Products Manufacturer. So I was visiting one day a few years back, halfway interviewing for a job, and on a shelf my friend (who isn't American) displayed various products that this company markets in other countries. Apparently in Singapore, it's OK to portray stereotypes, and there is a toothpaste product called Darlie... the original name was "Darky". They changed the name, but not the icon: a nice big ol' icon of a "black" man with bright white teeth. (Click on the picture to link to a Wikipedia article.)

And we wonder why there is such a thing as "immigrant racism".

...and just FYI, cuz it's still pissing me off, I never buy any product that has "Aunt" or "Uncle" in the name. Eggo Waffle syrup tastes great/less expensive, I make my own pancake mix from scratch (really not that hard) and what's so hard about cooking a pot of rice??? (one cup water/two cups rice, some oil, a tsp of salt per cup of rice if you like, heavy pot with tight lid, bring the water/salt/oil to boil, add rice, stir well, lower to a simmer and cover tightly for 20 minutes. Brown rice takes up to an hour). I admit to getting over the heebiejeebies long enough to try Uncle Ben's nukable rice, but it was so bland anyhow, that I'm back to doing my own thing. Not that boycotting these products will make one dent of a difference, but I can't bring myself to buy them just on my own GP.
=--==-===-=-=-=-=--=
As I said before I'm a month late on this, but here's another blogger's take, and here this blogger identifies the owner of Uncle Ben's, Mars, and that the top honcho is black. So I guess that's supposed to make me fee better, except some of THE MOST conservative and "buying-into-the-hype-they-sold-us" people I've ever come across are those of "us" who made it to the boardroom. Hell, we didn't get there cuz we stood up for Black Power, of THAT I can assure you. You only get "There" when you can play the game. Those that don't and stand for something unfortunately seem to end up getting shot.

Yeah, I'm getting more and more steamed the more I think of this....
Email Post
Labels: racism in advertising Uncle Ben's

Shark-Fu said…
Interesting stuff and thanks for sending the links.

I think you sum up what I find offensive very well. Rather than discuss the connection between the racist thinking behind these ads and the lack of brown representation in corporate America these fools have simply created an alternate reality.

Advertising is built on a foundation of stereotypes and predictable responses...and they will keep insulting the hell out of us until we change the response (for example, not buy this mess) which will change the data and thus the campaign.

The Bear Maiden said…
Thanks, and I'm honored that you'd drop by.