So I have to tell you that the initial ruling, kicking the Cherokee Freedmen out of the tribe hurt me to my heart. Truly hurt in a way I cannot explain. I almost dread Schemitzun this year, afraid that this ugliness will begin to separate us yet again. It's also ridiculous; much of this is based on the Dawes Rolls, which were incomplete and racist to begin with.

I'm not sure that my family is Cherokee, since the family was so damn tight-lipped about who was Indian, though I'm 200% certain that there is Native blood--and quite a bit of it--running through my veins thanks to my mother. Mima took me to my first Pow Wow, and I remember standing there completely overcome. Everyone around me looked like my mother and her family. Since then, the Pow Wows and my Native heritage has completed me, and my quest to trace my ancestry has led me to believe wholeheartedly that "blood calls to blood" and that while my mother's family didn't actively acknowledge that they were mostly Indian, they were. So as soon summer rolls around and the New York pow wows start, we all (my mom, my sis, the kids, and Mima) hit the trail. Sometimes, sis and I will even travel; year before last we went to the National Pow Wow in DC. It was indoors in an arena, hotter than you could ever possibly imagine, and lacked the same "feel" as the outdoor pow wows where you can sit on the grass in the sun. But it was extremely moving to be there with thousands of your cousins and brothers and sisters and distant relations, listening to the drums, in the capital of the country that has betrayed two sides of my family time and time again. 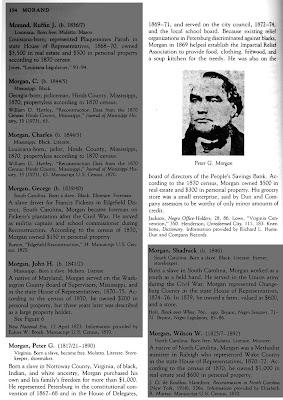 I traced an ancestor back to what was Nottoway county, Virginia. On a census he is identified as "mulatto" but elsewhere it was noted that he was tri-racial. A picture reveals him to be more Native looking than than anything else. It took an awful lot of digging, but the reason I found him is that he served in the Virginia House of Delegates during Reconstruction. He had been born into slavery, but bought his wife and 4 eldest children out of slavery--presumably from his own father since the owner bore the exact name. One of his daughters married the man who would go on to found St. Paul's Episcopal College, while another daughter married a Pullman porter and moved to New Jersey. The child from that union, my great- grandmother, went back to St. Paul's to teach after graduating from a "Normal" school in Trenton, New Jersey. It was there that she met and married my great-grandfather. My grandfather described his mother as "an independent soul" who took on the likes of W. E. B. DuBois, refusing to be intimidated by his pinz-nez glasses and gold-headed cane, and demands for a "half-cup" of his own coffee, rather than a full cup of hers. (She won that battle.) Pictures reveal her to look very much like her grandfather, and in turn her own children all had distinctly Native features, particularly as they aged--my great-aunt especially.

My mother's mother's family were also Native, from Lincolnton North Carolina--not at all far from Cherokee territory and since people have always traveled, it is highly likely that my mother's mother's family were Cherokee or Muskogee. However, they all claimed to be mostly Scottish, though again, photos reveal otherwise. Census records also indicate that many of them were "mulattoes" and were free during slavery; in fact owning property and businesses.
Email Post
Labels: Photos