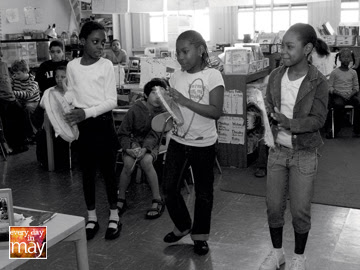 So my submission for May 3 (now yesterday, but I fell asleep) is three little girls at The Sun's school. They were demonstrating an Inuit dance and song. They had made the "drums" themselves.

About 3 kids were in each group and had focused on one area of Inuit life. These girls exhibit was about the songs, dance and stories. In addition to making the drums, they had made masks, and had started their dance demonstration with a folk tale.

I actually learned something; the difference between a kayak, and an umiak. This may not seem that relevant but it actually was to me. There's this book that The Sun and I have read over and over "Mama Do You Love Me?" and there is a line that goes "I will love you until the umiak sails into the darkness, till the stars turn to fish in the sky..." But the umiak in the picture (small rowboat) doesn't have sails. All the kids' umiaks had sails. Who knew?
Email Post
Labels: Sometimes I Draw