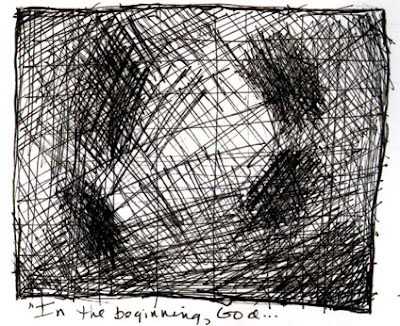 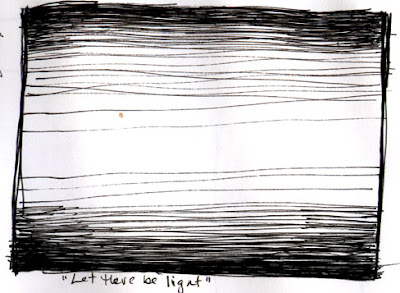 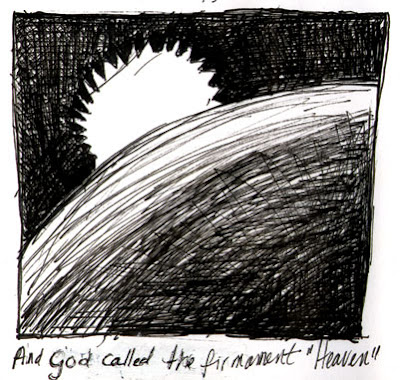 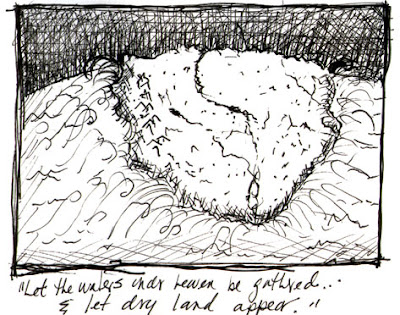 Today was a good day; it's getting easier to do this every day, and so I've been inspired. I found some more illustration blogs today, and while I am so NOT in that caliber, the effort I'm making to do something creative *every day*, with a special emphasis on drawing, is helping to get those juices flowing again.

I even survived a bout with PMS (and I never PMS, so when I do, it's very uncomfortable) and the Voices weren't able to pull me down too much (though they've been trying). And I was able to make nice with Vampire Bitch (who incidentally, since people have asked, is NOT MY BOSS, but she seems to think she is) even though I really dislike her.

But anyway... in my sketchbook today I did four thumbnails of an idea that's been rattling around my head for ages. I don't talk about it much--not even in real life but I do very much believe in God. In fact, one of the voices in my head talks to God constantly. And I do get answers or responses, but not as "I hear a Voice that I know to be God's." More like: "God, I really need a sign right now, today. I need an answer. I need to know I'm doing the right thing." And then something profound will happen, answering my question or dilemma, and I'll know that God indeed was listening. Then sometimes I doubt myself, because who could be that presumptuous to think they get an answer directly from the Higher Power?

Because I believe in God, I often look for ways to share that belief with my Sun, and this caused me to make the interesting discovery that it's VERY hard to find Bible stories where the people are drawn to look like me and my Sun. People all have their own vision of things, but most seem to accept the idea of people in the Bible all sporting Caucasian features. I've noticed in these more "politically correct" times that Bible stories, books and movies are beginning to sport a more middle-Eastern flavor... but still. It's as if minorities didn't exist until after Jesus died. And what's worse than NO minorities gathered around a blonde-haired Jesus, is the one lone poor black child, usually a boy.

While at Pratt, I started illustrating the story of David and Goliath and one day I'll get back to that. But something I've always wanted to do is to illustrate the creation story... It's one of my favorites. Actually, I love the way the Old Testament starts: "In the beginning, God..."

So today's creative effort was thumbnails of illustrations for The Creation Story.
Email Post
Labels: Sometimes I Draw