So I thought I hadn't created anything yesterday, the 8th of May, because I didn't get to draw. Yesterday was consumed with leftover bad feeling from the Staffbash, and then I worked a little on a project here, and then the rest of the afternoon was consumed with getting to Yonkers from E. 94th Street (and it wouldn't have happened without help from my friend LilacBlue, who picked up the Sun from school and took him west with her, so that I could meet them on 96th and Broadway). The trip itself wasn't long at all, except it was PACKED. For whatever reason, the MTA did away with the 1/9 subway that would alternate "skip stops" along it's route up to the Bronx. With gentrification happening in full force in the Inwood/Washington heights area (which the IRT #1 runs through) the train was unbearable. You have no idea what "squished" is, until you try to get into a crowded NYC subway at rush hour. You realize what it means to have NO personal space. My poor little man's face was right up against someone's butt.

But I digress. The new dojo is very clean, and it's proprietors are oh-so-proud (as well they should be) but I can't see us getting up there during the week with any frequency. Which is breaking my heart because The Sun is committed. If you're a parent, you understand what it's like to fight with your children about things like practicing, or classes. So that when they *don't* fight, and *beg* you to do something, and would happily do it every day if you let them, you know you've got to do everything you can to keep it going. Carajo!

We got a ride home from the rest of the kids from The Rock (who had also gone up there) and by the time I got home and made salad and hotdogs, I was barely functioning. I took a shower to wash off all the pollen that's killing me, and tried to sit at my desk to at least update my finances, and woke up at 2:30A slumped back in my chair. So that was that.

But when I got here to work this morning, I was greeted by the newest addition to my Play-Doh garden, a pansy. I forgot I made it yesterday, inspired by my little painting the night before. So here ya go.... 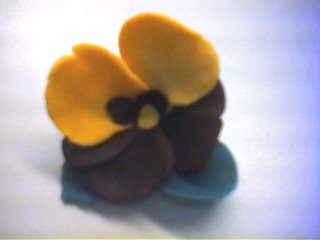 Nina said…
I feel your pain! I found myself brainstorming the other day as to how you could make it work with the new dojo. I've not yet come up with anything good. :(

The Bear Maiden said…
Thanks, Nina :)