I'm fighting against it. Life really isn't that bad but Light is missing at the moment. It got cold out. As much as the 80+-in-October-leaves-aren't-changing-"This ain't Natural" weather was getting to me, the sudden drop in temperature is disorienting. And I love hot weather. But summer in October makes me feel like the world is coming to an end.

And I'm really tired; I need a day or two off. I had 21 vacation/personal/whatever days here at this job, and a large proportion of them were used for Family Court. Or doing things for other people. And some for going away, but not enough. I miss being home. Alone. But, if I were to take the Sun and then come back to the Rock it would mean two hours out of my day. Unless I can get him up early enough and have him go in with the Moon.... hmmm. That's a thought.

The Creek (Muskogee)--literally fighting to stay alive (one person told a family story that some Creek were reduced to picking kernels of corn from the dung of Andrew Jackson's horses)--were like a wolverine in a trap. Desperate, they began gnawing at their own limbs, trying to get everyone out of their territory, thinking that by getting everyone--everyone; African or European or "Other"--out they'd have a better chance at holding on to their own lives. But by this point (early 1800s) people and families were so racially mixed it was impossible to draw a line. They literally did it by color or kinkiness of the hair. There was heavy fighting over the land. The loss of life was staggering on all sides. We don't see that kind of loss of life on a daily basis; it would be as if Iraq were on our shores, in our back yard. In 1828 three Muskogee women where whipped (by Muskogee men) literally to shreds for living with White men. And the alliances between Africans or persons of African descent had the added bonus of being frowned on and feared so badly by white squatters that "no public figure could bring himself to write explicitly about the possibility, even though it was on every one's mind. In late 1812, when fugitive slaves and Indians were joining forces in Georgia and Alabama, Governor David Mitchell of Georgia feared 'the very worst evils imaginable,' but he refused to elaborate." It was as if by also denigrating Black Indians to the same status that the Whites observed, that perhaps the Creek could save themselves. Only, it didn't work that way. Still, the Creek enacted laws in their nation similar to whites regarding the status of blacks, but the author (Claudio Saint) states (regarding the designation "Negro") "There is nothing self-evident or logical about the category, and it dissolves upon even the slightest scrutiny."

He goes on to ask:

"On the continuum of of skin color, where does one draw the line dividing Negroes and others? Why are Papua New Guineans, who most assuredly have dark skin, not considered Negroes? If the term is meant to encompass people from Africa, why does it not include Moroccans? If it is intended to refer to people in sub-Saharan Africa, at what threshold does a barrier become great enough to make racial divisions? If the Sahara is such a barrier, what about the Alps dividing Switzerland and Italy, or the Sierra Nevadas dividing California and the rest of the United States, or, for that matter, the Hudson River dividing Manhattan and New Jersey? Negroes exist first only in the eye of the beholder, although the category later takes on a life of its own in law, science, and popular discourse, and even the minds of those called Negroes."

Shit I've been asking myself that for years. And every time I'm faced with an job application form, or a benefits enrollment form, or a survey, or apply for aid of any kind I ask myself the same question. And I often wonder, who else in the world asks this question? Do other countries require the same types of racial definitions on their forms?

And I also wonder... this idea of race didn't really take hold in the current guise that we know it, until the late 1700's. And it didn't get *serious* until the very end of slavery. There's a whole world of intermixing before that point, and even past that point despite all the various laws and attitudes.

Yet, racism has become so embedded in the fabric of this country, and spread like wildfire to a lot of other places that I really wonder if the thinking can be reversed.

We have this typical assumption that slavery was enforced by pure white men who lived on large, green plantations with hundreds of dark/mostly African slaves picking cotton or being whipped out in the fields, and while this was certainly true for some families, particularly rich families, a large number of slaves lived with their masters who were also their husbands or wives or children, in a large and slightly unorganized mishmosh of skin tones and social statuses and ethnic mixes. It's not as simple as we've been taught to believe. And yet out of this comes this very strict idea of who's Black and who's White, and the Indian is barely mentioned.

For fun sometimes, I go back and look at modern day demographic statistics of the various cities I read about, to see what the ethnic mix is. And invariably you get numbers like " White 57.2%/ Black 40.6%/ Native American .1%/ Asian .4%" (Nottoway County, VA) and I think to myself, those numbers make no sense. Not if people were REALLY honest and dug further back than the 2 or 3 generations of the family they are willing to talk about. It's simply not logical.

Another, later thought (4PM) is that I read a quote the other day, when looking up Miscenegation Laws, that one "White" proponent states something to the effect that if God wanted the races to mix, he wouldn't have put them on separate continents.

But look at this map and ask yourself: 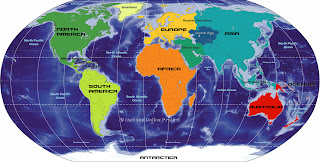 ...the "continents" Europe, Asia, Central Asia and parts of the Middle East are separated by what, exactly?
Email Post
Labels: Native Roots racism

Carrie said…
Arggg -- those forms. I hate the 'pick one box only' forms. And more so since living in Hawaii. How can the folks here pick one race? Really?

Carrie said…
Well, I'm working out on Long Island for a full week, but I've never been to NYC (I know, gasp in horror) so I'm staying on an extra 2+ days to go walk around.... (please be impressed that I realize that LI is far enough away that I need extra time to go into Manhattan!)
October 15, 2007 at 5:48 PM

Bonnie said…
I've wondered since I was a kid why we call Europe a separate continent from Asia. Makes no sense...

And to respond to your musing about having to check off a racial category...I think in the New World, race is a big deal and is used to separate people. But in Eurasia, ethnicity is the dividing line. In many European countries, people identify themselves by their national origin or ethnicity. And in China... man don't get me started on China! Never have I seen such a place, with so many people ALL THE SAME RACE! Ethnicity is a big deal there. They distinguish between Han people and ethnicities such as Miao , Hui, and Tujia when there is no racial or appearance distinction at all, and the languages have mainly been lost. You can only tell by last name and family history, but the Chinese make a big deal about it. And there are the terrible Han attitudes about the Tibetans...We were in a region with enough Tibetans for our contacts to have opinions, and they weren't good opinions...
October 19, 2007 at 1:09 PM