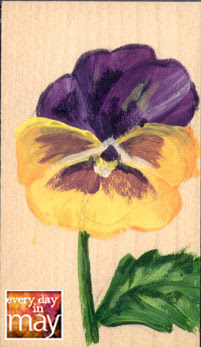 (Click on the flower to go visit Every Day in May)

I love flowers. Ever since I was a kid, I think. I remember in Jamaica we had all sorts of things growing in the garden (that was originally landscaped by Joseph the "yardboy" -- a grown man-- who came with the house when we moved in, but later sort of grew on it's own since we couldn't afford him anymore) like Birds of Paradise; these things that looked liked red cat tails, a hibiscus hedge (beautiful pink flowers with burgundy middles); and some bush they called "sage" but wasn't (and I recently found out what it was too, and forgot). That used to annoy my mother--the fact that it was called sage and wasn't. Jamaicans had the annoying habit of renaming or making up names for plants. Then you did some research and found that the plant was really called something else altogether. Like every generic speckled non-flowering plant was either called "crocus" or "coco". And they were neither. When I went back to Jamaica in 1988--the only time I've ever been back--I took pictures of all those plants and flowers I remember from our garden in the second house we lived in. The one we got evicted from. But that's a later story.

Anyway, I love flowers. At work, as you've seen I make Play-Doh flowers. I gave 3 away to co-workers and they want more because they say the play-doh falls apart. My across-the-wall cube mate, a really strange, sweet man who's father is dying, said he picked up my play-doh violet the other day, and unthinkingly tried to smell it. So I have to try to make some out of Fimo because it holds it shape better than play-doh.

I bought this book "Fast & Fun Flowers in acrylics" by Laure Paillex. I was forced to because my membership with this stupid book club was coming due and they were going to charge me $23 whether I bought a book or not, according to my "agreement" with them. The book is pretty good because it's step-by-step, but I have to say, the flowers all have that "Starving Artist Sale! Thousands of pieces of original, beautiful art at discount prices!" look. And I think it's because the woman uses a lot of white. My professor at Pratt and Disney artist, Peter Emmerich, always said you should never use white whenin painting or making highlights, because he said there really was rarely ever any pure white in nature, if you looked closely. It was usually a colored reflection. So he would use an unbleached white/parchment color, but mostly very pale shades of colors you wouldn't expect. He once painted a portrait of Mickey Mouse as a class demonstration, which he gave to me for The Sun, and where Mickey's ears reflected "white", is actually a pale turquoise. He also taught us that if you start on a colored back ground, rather than white, things look more natural. (My other professor, Zacharow hated outlines because he said "there are no lines in nature".)

Ages ago, I found these business-card sized slivers of wood at some online craft place, and sometimes I'll paint or draw on them. So today, I practiced painting my first flower; a pansy using acrylics and following that book for guidance, on those pieces of wood. It was fun... and didn't take that long, either. But does it look like a pansy?
Email Post
Labels: Sometimes I Draw

Julie said…
Well, of COURSE it looks like a pansy. My favorite kind of pansy too. I love the yellow and purple ones - I think they're called Johnny Jump Ups.
May 8, 2007 at 9:36 AM

The Bear Maiden said…
You're not fat, merely big-boned :) And if you are fat, are you singing yet? Is it over? *sigh*.