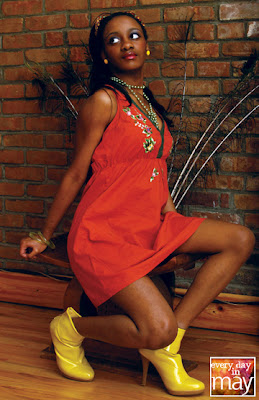 I'm going to count this one as two days. Yesterday, Saturday the Diva asked me to do a photo shoot with her for the stylist class she's taking at FIT. She went to Old Navy, picked out outfits, found accessories and shoes, categorized and fitted, and rounded up a bunch of friends to model. For someone who suffers with ADD (and definitely a severe case) she was *extremely* efficient and organized. At some point, there's a post I have to write about her, because I am so proud of the young woman she has become. As a teen, she was a nightmare. Though we never stopped loving her. But there were times when we all were seriously afraid for her future.

Yesterday was consumed with karate and Tar-jay, and putting away of groceries and laundry-doing, and my sis was a major part of my getting things done yesterday. Generally, I try not to ask for much from her, because everyone else does. At 6P, we headed down to sis's house but in the meantime, the Diva had called her mom in tears because all the models had bagged. So we rounded up cousin Leon, and sister Pooh, and my sis' college friend and ride-or-die bitch, and headed to the house. My sister managed to squeeze 11 people in a van meant for 7.

Once at the house, the Diva got to stylin' and accessorizin', and Ma helped with the makeup and I took 41 pictures. More, actually, but some got deleted because I only have a 1G card. Many of them came out very very well, and I'm in the process of editing and re-touching but the very last shot of the last model came out the best I think.

So that was yesterday's creation. Today was to take it into Photoshop and fine-tune it; softening the skin of her legs (just because I could) and removing the peek of white sock in the boots. So here it is.

There's more to my story... I realized today that Sundays are my least favorite day of the week. It's when I feel most alone and burdened. But... some people have worse problems, right?
Email Post
Labels: Photos