...this Internal newsletter thingie is killing me. I don't think I ever put this much work into a newsletter, even when I was doing one for The Sun's school. And I can be pretty obsessive. But this is ridiculous. And the problem is that when it gets to Big Kahuna's desk (who must see it, you know, because it's that important), it will all change again. Luckily, (hopefully) I won't be able to touch it cuz as of now, I haven't upgraded to Quark 7, which is what the Vampire has. And claims she can't save "down from". (If I didn't mention it she's the lead designer on the thing, which means she gets to do all the tweaking, after I've done all the friggin' work.) Which doesn't seem logical; though software companies are strange bedfellows, so you never know. Could very well be that you can't "save backwards". But for right now we have different versions of the software, so once she takes the newsletter file, she owns it. Which is probably why she's dragging her feet on getting it from me.

But the thing puts me to sleep. And I can't do anything else cuz they keep kicking me off my computer so that they can "edit". What? Sleep/nap while they use my computer, you say? My body wants to, but I'm in a cube with two chairs so that snoozing would definitely be noticed.

Went to see Poppy today. His dialysis center mates were looking particularly sickly today. One was hurling outside the door to the center, and the rest looked really bloated. Poppy looked good... I brought him some fruit but he ate most of my oatmeal raisin cookie instead... Not that I'm complaining.

I have a seriously stiff neck and really wish someone would work it out for me, but that ain't gonna happen. And what else can I gripe about;... hmmm. The Pratt Show is this week, where all the seniors of the various programs at Pratt get their best work selected by the dean, and they get to display it. I got to do the Pratt show twice; one as a graphic designer and once as an illustrator. It was an awful lot of work, but fun and very rewarding. I really wish I could go... see who shows up, etc. but I probably can't. Big bummer.

I haven't drawn anything today yet, but I probably can while the Sun is doing Karate. I really want to go home. Oh. And I really want to get rid of my sofa. I'm sick of it. I've had it since I lived with Jerseyboy some 15 years ago, and it's one of the last vestiges left of that life. Want a futon sofa, anybody? It looks like this: 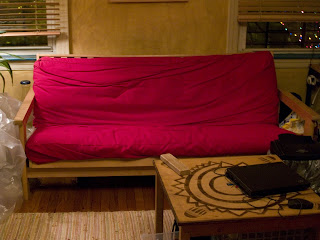