It wasn't something I could watch, the HBO special. I knew it as soon as I saw the "coming attractions" on HBO. But of course I ended up flipping on the TV right at the worst part, the part where Sitting Bull was shot and the massacre began. It was heartbreaking.

A few years ago, right when I was beginning my search into finding my Native ancestors, I read "Black Elk Speaks - Being the Life Story of a Holy Man of the Oglala Souix." I don't remember how I found the book to read it, and I didn't know at the time that Black Elk was a witness to the Wounded Knee massacre. And so I came to the part about the massacre by accident, much as you would if you were someplace and violence suddenly erupted. For days after, I carried with me Black Elk's vision of what happened; I could see it through his eyes. I never read Dee Brown's book; I knew that I wouldn't be able to.

My mother's family is Native--on both sides. Yes, mixed with Irish and Scottish and African, but Native. Throughout the generations of her family, blood has called to blood, and each "mulatto" or mixed race person seemed to have found a mate who was also mixed or "mulatto". Growing up, we didn't have much to do with my mother's family; it was well-known that my mother's choice in marrying my darker-skinned father was a major disappointment to them.

Yet, they were all fiercely "Black". They fought for justice for "Blacks" as lawyers, or became the founders of well known large insurance companies for "Black" people. My grandmother was a social worker before she married my grandfather. Her cousin is a reknowned "African American" artist. They never identified as anything other than "Black" and yet I knew all my life how much my grandmother hated my "Black" father. 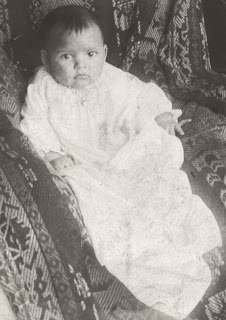 I have a picture of my grandmother at about 8 or 9 months, in a christening gown, posing on what appears to be an Indian blanket. My mother argued with me that it was probably a studio prop used by the photographer. But back then photography was a big deal; I found it unlikely that an photographer would arbitrarily use an Indian blanket as a prop, particularly when it was not at all fashionable to be Indian. But grandma never ever talked about her heritage. Not to us, her dark-skinned grandchildren that she barely knew, not to my mother. The only thing she ever said was that her grandparents were first cousins, and that her father Albert was Scottish, "mixed" but to tell the truth she never really elaborated on what he was mixed with. She said that her mother Josephine's mother, Mallie, was black (and of all the photos that I have, Mallie is the only one with dark skin) and that Mallie's husband Andrew was Indian. 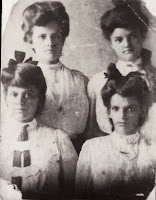 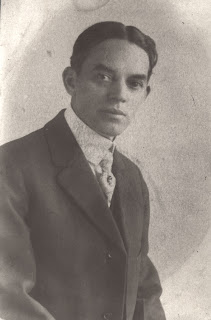 When my grandfather died and I got to take the family pictures home with me (my grandmother having passed away a few years earlier), Albert's photograph became an obsession. The fire in his eyes and the set of his jaw, along with the apparent duskiness in his skin did not look at all Scottish to me. It was much harder to get a feel for his sisters, maybe because the picture wasn't as clear, but Albert haunted me for days.

Today, my mother went down to visit her mother's cousin, the artist. She is 92. I should have gone and I'll probably regret not going. I thought to take pictures, but instead I was out last night carousing in clubs and spent the day still running from the mess that is my apartment.

OPechanga said…
And now, the sad story of tribal disenrollment is occuring in California.

The Pechanga Tribe of Luiseno Mission Indians have destroyed 25% of their tribe via disenrollment, violating their civil rights along the way.

Take a look at this blog: