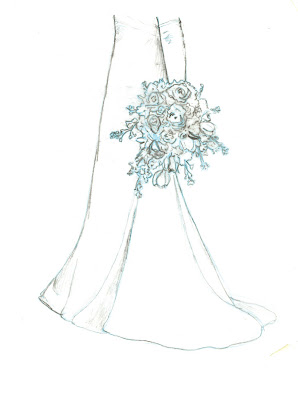 So this is a work in progress. I actually started it months ago, but lost the thread. Yesterday I decided that instead of rushing to do one thing--badly, I would try my hand at working steadily on something every day to completion. So, I finished tracing (which as guilty as I feel about "cheating", illustrators are allowed to do) my reference for this piece, and added some details of my own.

The next thing is to transfer it... either to clayboard which I love, or good paper. But I might try painting on clayboard. I've never done that before; only used ink on clayboard.

No, it's not a secret dream or anything (although I guess it would be nice to actually wear a wedding dress, should there ever be a "next go round") but the photo I'm using as reference was quite striking and beautiful in it's simplicity. 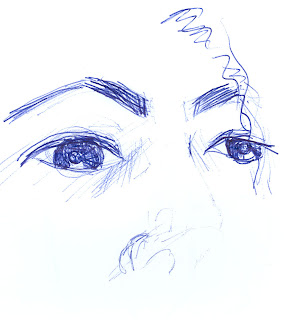 In addition, I did at least break out a mirror and attempted to draw my eyes yesterday, while I was riding the subway home. This was in my sketchbook, with a ballpoint pen. Don't think it looks quite like me, although I got my eyebrows right.
Email Post
Labels: Sometimes I Draw