Tales From La Vida Low Budget - How It Began

So part of why I wanted to finally start this blog was to begin to recreate some of the stories of my life. As I said in my short profile, I've been on some weird trip, and I often feel that the only thing that connects any of the stories is the fact that they all happened to me.

It's been a rough couple of days for me internally; a lot going on. My life never goes the way I plan it... NEVER takes the easy road. I was trying to construct this latest episode in my saga so it would go fairly smoothly, and of course it's not happening that way at all. But I get tired of wallowing, so in an attempt to shake myself off I'm going to switch gears and back up some, back as far as I can go. (Plus, the sun is coming out tomorrow, the weather people say, so it's time to stop being droopy.)

So lets go back. WAY back. I'll start with the stuff I was told, and then tell you all what I actually remember. And I remember a lot. Don't know why that is, since I can barely remember yesterday, but I can still remember not being able to talk.

Anyway. I was born in 1965, four days after Malcom X was killed. My mother was still in the hospital with me. Malcom X's death was pivotal in my life because if he hadn't been shot, we probably would never have left the country. But that happened a little later. I was born in what was then Saint Claire's Hospital in Manhattan, but was brought home to Riverdale, the Bronx. A neighbor remarked that I had "good hair", and this was also pivotal in my life. A few months after I was born, Poppy got a job teaching at the University of Geneseo, in upstate New York, and so we all went up there for a minute, but came back to the Bronx. My earliest memory is there. Ma says I must have been almost two.

My mother is a visual artist. At the time, she painted bright paintings with lots of geometric shapes (lots of zigzags, I remember) in acrylic on canvas. They looked like this: 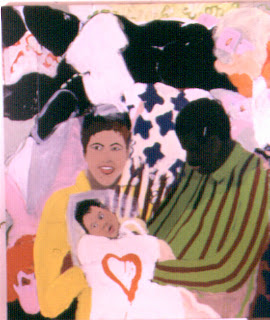 It was close to Christmas, and she had taken one of her paintings and mounted them in a cardboard box with a frame cut out. She lined the frame with Christmas lights, or some bulbs, so that the box looked like a television. I'm almost certain we had a television, because I remember knowing that the painting was NOT a television, even though Mima, my babysitter, kept telling me to "look at the television that Mama made."

Mima was about 18 then and I loved her. I still love her; she doesn't live too far from me in the Bronx and I don't see her all the time, but I see her often enough. I always wonder how to relate what she is to me now; an older a sister, an aunt, a cousin. Nothing accurately describes her and the love I have. There was about 20 years that we didn't keep in touch... when we finally got back together, it was as if she were always there. She was such a HUGE part of my early memories.

But anyway, on this evening she was babysitting for me, and Ma and Poppy and their friend Marcy (who I think is my godfather) were going out. Ma had on a red raincoat, and I remember her glasses and that her hair was short. I remember them saying "bye bye" to me, and I remember that I couldn't really say much back to them. I wasn't sad or scared that they were going out, because Mima was there. 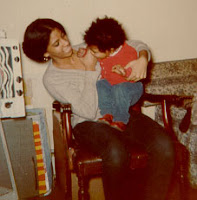 Here's a picture of me and Mima. I must have been a little over a year old, about the time I remember. To Mima's left, that might even be the picture I remember.

My next early memory is being on a plane, going to Paris. It's very brief and foggy, and of course I don't remember specifically that I was going to Paris. I just know that's where I ended up. But I do remember the airplane, and feeling very little but very awake, and I remember something about it either being night time, or watching something like the late show. I remember almost a cartoon-like image in black and navy, with a yellow moon. It's funny how you remember things when you're little like that. It's very literal. And it's interesting to see how your mind fills in the blanks.

So we got to Paris, me, Ma and Poppy, and Mima followed us shortly afterwards. She'd been accepted to Sarah Lawrence College, where Ma had gone and Poppy's mentor taught, but my parents offered her the trip to Paris and to live with me, in exchange for her being my permanent babysitter. We slept in the same room... often in the same bed. We lived at 4 Rue Regis, up a couple of winding flights. There was an old fashioned elevator in a black iron cage but I remember

climbing those stairs. They were huge to me, with windows on the landings between floors. The google map link seems about right; I remember the park - the Luxembourg Gardens, wasn't far because we would walk there. We had an iron balcony out the living room, and it was shared with the family that lived next door. Anne was her name, and I both loved her and hated her and would often push her around. Poor thing. Once, I wanted to see her. I wanted to show her my zebra pajamas; they had a hood with ears and a tail, so I climbed over the rail that divided my balcony from hers and went to visit.

The adults freaked. We were 4 or 6 stories up (6, I think). The next time I went to climb over the rail to see her, I was thwarted by a tall wooden fence that was tied there.

The next time I pick up the thread, I'll tell some of the adventures I remember with Mima. But now I have to do some other stuff, like get ready for bed.
Email Post
Labels: Tales From La Vida Low Budget

The Bear Maiden said…
LOL! You can question the blog... just don't question *me*... and I didn't mean stuff about the pictures, either ;) But you always know everything anyway. I had them; don't remember how I came across Ma's. I think I scanned some slides she had.
April 20, 2007 at 11:31 PM