Nana Jessie (1876)
Psalm 62
Got up medium. Dressed. Pop went to Biscayne. We stayed home. Came back. Helped with fire. Nothing much happened. We ate and rested. Louis, Whiskey and Devil were fighting Bobby. We fed and groomed him. He stayed on our roof. Pops got a ??? Then Mr. W- came; mom dealt with him "properly." He lost his eye in court on Friday (Pops went to court.) Ate supper. Put on pj's after showering. A good day. Thank you Mr. O, thank You.

Marvelous. In court on Friday, at first (Pops said) the judge thought Pops was Mr. W--. Mr. O took care of Papa. I thank Him.

Today is the 131st anniversary of the birth of Poppy's Grandmother. She is the reason we kept track of who we are. When Poppy was a little boy, she told Poppy repeatedly the story of his family, with such accurate detail that when I went and Googled the street she grew up on in Savannah, Georgia, everything she described was exactly the way I found it. My friend LilacBlue went to Savannah, and could even find the street. It's ironic, because that side of the family contains no known stories of Native blood; they were "Mulattoes" in the strictest sense of the word. But because Nana Jessie was so precise, and my mother's family was so vague, it challenged me to seek answers about my mother, using the tools I had learned about to verify Nana Jessie's facts.

So. Louis, Whiskey, Devil and Bobby were the dogs from the yard across the street. There was also Rex, the world's ugliest dog but for some reason he wasn't involved. I don't know why the dogs all turned on Bobby that day; we heard this huge doggie commotion and ran outside. We probably separated them by throwing buckets of water at them. Bobby was all black; he looked like a Lab. He was a really sweet dog. So he spent time with us that day, being fed and groomed, then I think Speedy came and got him later and took him back across the street.

And Mr. W-. He was the landlady's son. He was a disc jockey on the radio but I think at the time he was cracking up a little. When we first moved into the house he lived down the road with a pregnant girlfriend. It was the first time, for some reason, it dawned on me that you could have babies and not be married. It's not that I didn't know plenty of women in Jamaica who weren't married and had babies, because I did. But somehow, at 10 or 11, it clicked. My mom always used to say "when you grow up and get married" so often that it was all one word to me. Funny that I grew up and got married... then got unmarried and then had a baby. So much for trying to brainwash your kid. In any event, by the time of this entry, the pregnant girlfriend didn't live there anymore, and Mr. W.- was looking kind of shabby and unkempt. Obviously by now we must have owed some serious back rent, which is why the W's would have taken Poppy to Tenant's court.

Anyway. I'm almost 99% certain that this particular day was the day I looked up the slight hill on the south side of the house, and saw Mr. W- sitting on the curb sharpening a machete. I ran and told the parents about it, and Sis and I hid under the front living room window watching Mr. W- make his way down the short block to our street, and knock on the gate with a stone. (This is what most Jamaicans did, instead of here in America where you go up and knock on the door or ring the doorbell. Most Jamaicans had several mangy "yard dogs" who's job it was to keep people from coming in the gate, and most Jamaican yard dogs were very effective at their jobs).

At that time, my mother had long hair, and I remember that this day she had it in the two braids she often wore, and a sort of prairie type skirt. She stuck a kitchen knife in her waist at her back, and went out front to talk to him. Don't know what she said, but he went away and I remember being in awe of her calmness and bravery, and I remember knowing at that moment that she was Indian. She always used to say to the Jamaicans (who only knew about Native Americans from the John Wayne westerns that made it to TV, or Tonto from the Lone Ranger) that she was Apache and we'd giggle about it. But that day her quiet fierceness made a huge impression on me. Particularly since BigBear is not the silent type....

From memory, I've drawn a quick diagram of the house we lived in, and the surrounding area. 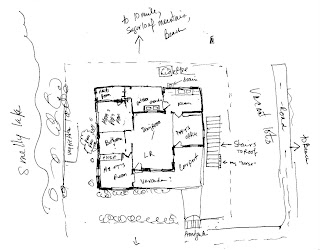 I'm a little confused about some details... like I don't remember the bathroom *at all* and I think Poppy had another little bathroom somewhere between his "office" and the kitchen. Also, I can't really remember how the back bedroom opened up onto the little veranda out in the back of the house.

But I do remember what the surrounding area was like... 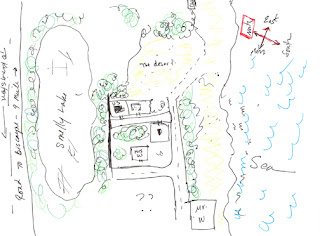 professor said…
there were steps that led down from the living room to that side of the house (the lakeside). the bathroom was directly in front of the steps, the front room was to the left and the back room was to the right (if you were facing the bathroom). the back veranda had two entrences. One was in the back bedroom, and the other was in the kitchen. the back veranda was high and had high steps (which you pushed me down many times)and there was a big deep wash sink there too. at the base of the veranda was another dingy bathroom that we never used (we locked matt in there when he got rabies). there was a bathroom between poppys office and the kitchen that we rarely used, I think it only had a shower.
July 31, 2007 at 4:27 PM

professor said…
in the other drawing accross the street was an empty house that no one ever lived in and next to that was andrea house
July 31, 2007 at 4:29 PM

The Bear Maiden said…
I absolutely have no recollection of the empty house across from us. Really??? I'm surprised I didn't make you "explore it" with me or something hairbrained like that...