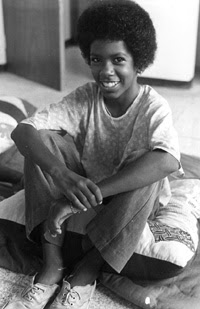 Got up at 6:30. My temp was 36.7. Dressed after washing up. Cleaned our room tho there wasn't much to clean. Then the Atkinsons came, kids and all. Ate. Rested, after seeing A- and washing dishes. Saw Speedy. Played Chinese Checkers with T. She won 4, I won 1. Showered, put on p.j.'s. Ate supper, heard Dulcimina." Going to bed. Thank you, Mr. O, thank you.

I ate: That's me at about 12. Not a flattering picture, I don't think. No self-respecting 12 year old these days (Moodmagicbarbie, for instance) would be caught dead looking so unstylish. But I lived out in the middle of nowhere; who was looking?

My diary from that year was "terse," mainly due to of lack of space. It's a 5x8 appointment book, with each page divided into two days. And I would take about a quarter of that day segment to list the food I ate.

I remember at the time thinking that listing the food was a waste of time and took up space from other, more interesting things, but my mother always listed her food that way in her diary. And you know I'm anal and obsessive, and must do things the "right" way. But, 30 years later, I'm glad I did list the food because it's interesting to see what we were eating--and how little we were eating. In this country, we eat so much by comparison, and the only reason this would even be something I think about is because my friend Fat Lady is obsessed with the subject. As is my sister, and my mom. And I wonder sometimes why it is that this is never ever something that deeply concerned me. But I kept track of it nonetheless, because I figured that's what women do... they keep track of the food. However... reading how little I was eating reminds me that my own Sun, who eats very little and is built very much how I was like then, is probably OK and I should stop worrying about.

America is a really big country. Everything here is big. Our cars are bigger. Our homes are bigger. Our egos are bigger. Our supermarkets are bigger. I've been here 30 years now, and I'm used to the "bigness", but as I look back at an old diary I can remember that not everything is so big. I can remember feeling overwhelmed by all this "bigness". I'll never forget the first time I walked into an American supermarket. It was HUGE. I couldn't believe there was a a whole aisle of candy. In Mrs. Jone's shop at Biscayne there was a jar of "Busta" ( a candy named after one of Jamaica's National Heroes, Alexander Bustamente and made from ground coconut, sugar, and molasses), a jar of Tamarind Balls and maybe some Icy Mints. That was about it. I remember standing at the foot of the candy aisle at the A&P in Miami and saying "geeeezam!" The soundtrack in my head has overdubbed the heavenly chorus...

But in Jamaica I didn't think about food too much, except if I was hungry. And not so much in '77, but there were times in '75-'76 when we were first evicted that I was hungry. And when we moved to the house in Bull Bay, the year I was 11 all I wanted for my birthday was a jar of peanut butter that I didn't have to share. And I got it; I walked around with a spoon and ate peanut butter for a few days. It was great. There's nothing like getting something you really want for your birthday.

We never went to bed starving, but there were definitely times I went to bed a little "unfull." And it's not a bad thing, you know, to be a little hungry. I didn't die; none of us were the worse for it. You forget, living in a big big country with big big things, that you really only need a little to survive. 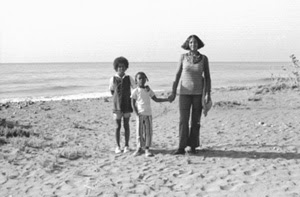 Speaking of little... here we all are, standing on the beach that was south of our house. We're all very little, BigBear, the Professor and I, standing next to the big big sea. I think Grandma had probably sent us the clothes, cuz my mom made a good portion of what we wore, and the rest came in big packages from America from Grandma (then called Mamabelle in an effort to a. relieve her discomfort at being our grandmother and b. make her seem more likeable) or my Aunt S (my father's half-sister) or one of Mamabelle's friends. I remember loving that tunic; it was a brown faux suede with fringes on the bottom and a leather lace-up front. (See, that Native blood thing was strong even then, even before I knew who in my family had that blood.) The Professor's jeans were brown, black and white striped. Very trendy for the '70's. Dressed like that, we were probably on our way to "town", to Kingston. We'd walk up the beach to 9Mile and catch the X98 "Express" bus into Kingston.
Email Post
Labels: 1977 Photos sardines Tales From La Vida Low Budget

professor said…
look at bigbears hair...moodmagicbarb would DIE if her hair looked like that, and she constantly fights its, thats why she never wears it out
...btw, those were my FAV jeans...
July 14, 2007 at 10:44 AM