Skip to main content
Labels
February 25, 2008
So we went out Saturday, the Professor, OneHalf, LilacBlue, The Fat Lady and (hmm she's new to the group... lessee what can I call herAH! WhiteHorse, because she was born in the year of the White Horse which she said is one every 100 years or so) WhiteHorse, and myself.

Actually, the other moms don't get out much (not that I do, but I think I get out more than they do), so they did pretty well, under the circumstances.

We met first to eat at Planet Sushi--my new favorite place. I of course was late. Food was good. Professor's not too into sushi which I feel bad for. Cuz sushi rocks, if you ask me. And, it's good for you! The mom's brought me a cheesecake, which the waitstaff brought to me with a candle and song... Then the Professor and I convinced all the moms but OneHalf (she likes her hubby!) to go down to B'way-Houston to Gonzalez y Gonzalez. I haven't been there since spring, I think. 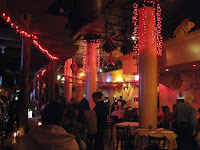 That place is ancient, by New York standards. It must have been there for 10 or 15 years. Maybe more. And before it was G&G, it was called Bar Lui, where the Professor and I and a friend (who's insane) would hang regularly. It was a beautiful place, and they served a blue martini-type drink. That I drank way too many of.

Anyway. The thing about G&G is that there are ALL types of people... all ages, all colors, shapes and size and combos thereof. And the food is pretty good Mexican/Latin, should you care to eat. But the music, the live bands, are slammin' (I wish my Treo had a better mic...). And unlike most other places in NY, you can walk in with nuthin' but a smile and your ID. In other words... no cover. But they getcha on the drinks. Another beautiful thing is that before the band comes on, they give a salsa dancing demo/lesson. Eh, I'm not that good at it. I got my little two-step I do that serves me just fine. If I get drunk enough I can throw in a "dutty wine" or two. But I tried.
There was a dude there who was pretty cool; he kept coming over to us to show us the steps. He was smoking weed (I could smell it--I'd know that smell anywhere), but wasn't drinking, which gave him a totally different vibe than most other men, who usually end up getting more and more "friendly" as the night goes on. But he was cool, and I actually enjoyed dancing with him cuz he was respectful and funny.

The Diva, now that she's 21 and can hang, showed up, but the Moms were starting to fade and were on their way out when she pranced in about 1A. The Professor's long-time girlfriend and sort of family-member by way of children-in-common was there too, and we hung out till about 2A.

The next day, Sunday, sucked pretty bad as far as MentalHealthDays go. But at least I wasn't hung over. Luckily, the Sun was with Shoefly so I could weep and mope unbothered for a while, then I sucked it up and went and got him.

I'm just freakin' overwhelmed. I don't even know where to start with anything. Nene called for no good reason, well, he wanted a letter but I'm annoyed at him, too. I overheard him being a whiny sniveling bitch-ass punk on the phone with babymamma the other day, and it annoyed the piss out of me. I hate that she manipulates him the way she does, but one thing I know for certain... when people are in that kind of situation nothing you can say can make them "see" it, till they see it. I should know. I went through it. So on one hand, I feel for him, but on the other hand I've no patience. And normally, I call him out on shit, and I think he called me expecting me to call him out ( I just walked out when I heard him -- no goodbyes or anything) but I wasn't in the mood. I got my own shit going on.

I need to figure out how to cut myself some slack... catch a break, or something.

The voices were especially unkind today. Sometimes they really go off on rants. I think that's why I have narcissistic tendencies, to compensate. Or maybe it's the other way around. Whatever. They can be mean and unrelenting.

But I'll survive. I have no choice...

I want to comment on some of the comments I got to my post the other day, but I don't have the energy at the moment, and besides it's way past my bedtime.
Email Post
Labels: Ramble On Things That Piss Me the F Off

Ros said…
Great night out, I'm jealous. I encouraged FatLady to stay out for the dancing; I'm glad she did. Wish I could have been there.

What made Sunday so bad? Just shit catching up to you? Or was it drinking the night before? Personally, I find I can't handle alcohol right now. Even if I have just one or two, the next day I'm so depressed I wish I were dead. Bleah. Hope today is better for you.
February 25, 2008 at 6:19 AM

All-Mi-T [Thought Crime] Rawdawgbuffalo said…
a blue martini like drink, sounds like what they used to drink on star trek LOL, sounds like yawl had ablast, and thanks for the note, think its from incogman
February 25, 2008 at 10:11 AM

professor said…
I wrote a beautiful comment and lost it in cyberspace...SHIT...
I was saying that your mood is due to letdown...we had such a beautiful time it took you back to days when you were "young and carefree"...I know it's hard with bills, responsibilities and being a single parent, but you are not alone...I know it's not the same but at least it's not just you and the cat...DE PRES SING...
I'm glad you got to clear your soul...now start fresh...like the day after a rain storm...the air is clean and crisp, and everything looks all clean and shiny...
make a solid business plan, get through the next couple of months and in july we are gonna blow up...
keep your head up...love ya for life sis...
February 25, 2008 at 10:59 AM

The Bear Maiden said…
Yeah, Ros, I was glad she did too. And she looked so cute in her dress, the one that she bitched about all night. Well, she bitched about the boots, mostly. But I was impressed. I owe her a dress the next time we go out. That you should come up for. Though that could be a bad thing. As TinyOne would say "You scarsht me". LOL.

As for the next day, all, it could have been "letdown", it could have been tequila blues, but I didn't drink that much (in comparison to what I can do) and I don't know that it was let down. Its just I know I'm standing in my own damn way. But mostly I FUCKING HATE NOT HAVING MONEY, but at the same time I FUCKING HATE THE IDEA OF GOING TO WORK EVERY DAY and yet, I'm really not any FUCKING GOOD AT KEEPING MYSELF ORGANIZED enough to work from home. And people take so GODDAMNED LONG to pay you when you're freelance.

The problem is I think too much. The voices are good and bad, but they are always chatty. I wish I could be paid to blog, lol. Cuz I like writing the voices out of my head. But I'm working on that idea....