no, really, you nasty bastard. My Cat. The big-eared freak Simba.

I hope I didn't do it. I routinely abuse him... he's a big fat stubborn Abyssinian, with a really annoying voice. They are very outgoing cats. I got him because I'm insanely allergic to cats, and supposedly the breed is the least allergenic.

I can't even pet my cat for long, without my eyes swelling up and my throat closing. When he was a baby, before the Sun was born, I used to bathe him regularly and take him for walks on a leash. He liked neither of those things, but it helped to keep the dander down and I could pet him. Now he has to rely on UpstairsNeighbor (who he adores) for his cuddling.

I was lonely... a single chick. I'd a had dog... a black female I'd named "Girlfriend" but she was neurotic. Then I got involved with TF, and between his psychosis and her chewing up all my shit, I thought I'd go mad, so I got rid of her (shoulda got rid of him but I guess I was lonely). She's another story I'll tell at another time, but a while later I decided I needed a steady companion and decided on a cat. I found several breeders, but one was living in Rochester, on her way to relocating to Denver, and was visiting her son in NY. She told me she'd bring the Cat with her--then 5 mths old. She told me he had a "defect"--a white patch on his chest, and made me promise that if I took him I would a.) never let him outside, b.) never breed him and c.) get him neutered. She also told me she'd give me a break on the price. Maybe she did... but he was still expensive... $550. I couldn't afford him (of course) so she let me pay in installments. His nickname became "$550 the Credit Kitty".

I went to her son's apartment somewhere on the upper west side, and I got there before her. She came in, and let the cat out of the carrying case. Now, most cats would have looked a little freaked out after a long ride on a plane and a train. Not this cat. He sauntered out of the case, poked around, went to potty in a box top filled with sand, drank some water, ate a little food and looked at me like "WELL!?" 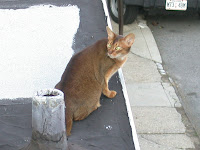 He had the biggest damn ears I ever saw on a cat. I knew that any cat who could saunter around like he owned the joint was just the cat for me, so I took him home. I got him neutered. He's never been bred (poor thing). But in the summer he figures out how to go outside...

Funny thing... he never liked TF. TF had keys to my place and used to say that whenever he came in and I wasn't there, the cat would hide. I should have listened.

I got pregnant. Most of my pregnancy, it was pretty much me and the cat. TF and I fought a lot (not hitting fighting, just an awful lot of stressful yelling and lots of phone destroying and maybe a flung/broken sugar jar or two) and then we wouldn't speak for weeks so it was me and the cat and my big belly.

When the Sun came along, the poor Cat went into shock. I have pictures of him sitting near the Sun's little hammock with his ears back like "when is this little fucker gonna disappear????" but he never ever touched him. Never got in bed with him, never sucked all his air out like the old ladies like to tell you they do. But he did get a urinary blockage. And had to be rushed to a hospital. And had to eat very special prescription food for years and years or he'd block up. Very expensive food, I might add. He didn't like the fact that the vet squeezed his bladder. He never forgave him. 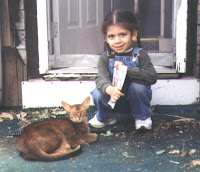 A few years ago he got blocked up again. As soon as I got him in a cab he started squawling. He remembered the vet's office and tried to get away. The vet touched him and he hissed. They sedated him, unblocked him, kept him overnight. The next day, early, the vet's office called me:
"Come get your cat. He's terrorizing the office".
"What? MY cat? He never even hissed at the baby!"

I got to the vet's office and heard such a squawling and hissing. Like a wild tiger. "That's your cat" they said. "I've never seen such a vicious cat before" said the vet. I couldn't believe it. Cat calmed down the minute he saw me. I brought him home. I kept him healthy, afraid of ever taking him to the vet again. He once beat the shit out of Romeo, the Professor's little ChiPom, who now belongs to Poppy. Beat him so bad the dog was trembling. But he was always gentle with the Sun. He's not warm and fuzzy, but he tolerates him. He leaves when TinyOne is here.

But something's wrong with his teeth. He hurts. I've lived with Cat for 10 years, and we know each other very well. He knows when I hurt or am sad. He'll put his front paws on my leg, and then reach up to pat my face. When I'm upset, he stays close. When I'm cranky, he stays away. He always tries to sleep in the bed with me. He waits until he thinks I'm asleep and then he sleeps at the foot. He jumps off the minute I wake up. Often, the only way I know he's been there is the enormous pile of hair on the bed, or the fact that I can't breathe. He's fatter than he should be, so I can hear him tap into my room, and stop at the bed. "Don't even THINK ABOUT it" I'll say, and he'll get up and tap over to the radiator.

So I know he hurts. I can feel his pain. It's awful. I hope I didn't do it... I pushed him away the other morning because he was yowling something fierce, pretending he was dying of starvation. He's not... in fact he's fat.

I think he tried to jump on my IKEA recycle bins. They have a slanted shape and if you were to land your heavy-ass cat-self on the front, they would surely tip over. Which they did... I came home and they were on the floor, but I had an old steam iron on top, which I need to throw away. I think he tipped over the bins and the iron fell or knocked him somehow, and his front tooth is loose and crooked. Yesterday he was crying something fierce. Not so much today, but he hurts. He's drooling and he hates that. He knows he's pretty. 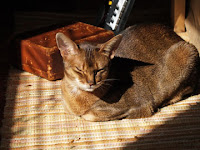 I called the vet today. I wanted to bring him but can't before Saturday. He hasn't been there in awhile, so they didn't have a chart on him anymore. I told them, well... I'll need to sedate him before I bring him in. Trust me... you'll remember him when he comes in cuz he's gonna break fool. The vet assistant said she'd have the vet call me back. He never did. Fucker.

I'm feeding him canned food, to go easy on the teeth. I kind of hope it heals on it's own. But if it doesn't, callback or no, appointment or no, I'll take him in Saturday morning. Please send Cat some "get well" vibes....
Email Post

Regina said…
PV's for the cat - and for you, too. My two furbabies are getting old, and stiff in the joints - so they both climb up the stack of trunks and junk at the foot of the bed to get up. They don't tap, either -they thud.
February 15, 2008 at 9:46 AM

Nina said…
Hope the cat is doing well. LOL about the stinkin' vet--maybe they destroyed his records on porpoise. Shocking!

I am constantly surprised at how ungraceful our cats are. They are constantly falling off stuff, losing their balance, etc. Totally uncat-like.