My Sun, my great love, got a black stripe added to his orange belt. The next level up, in this 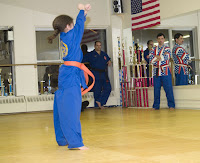 He did amazingly well on his katas. He always looks so focused, and snaps his gi. I was very very proud. Sparring, eh, not so much. He doesn't like to be hit, doesn't like to hit first. He's definitely a lover, not a fighter. 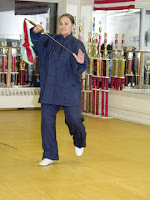 Bigbear had been invited up to the dojo to do a Tai Chi demonstration. It was pretty cool... believe it or not I've never seen her do it. She was slightly nervous, but she didn't show it, and Shihan and the Senseis were quite impressed. 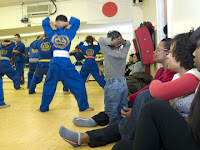 TinyOne was hilarious. He watched in rapt attention as the nominees did their workout. One of the excercises was 100 jumping jacks. Shihan called out every 10, and there was a 1-second delay and you'd hear TinyOne's voice calling the numbers out after him. He tried to do the excercises, watching from the sidelines.

Here is my Sun with his Senseis, Little Brother and Big Brother, and Shihan: 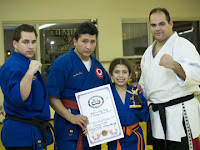 University of Bridgeport, here we come!