My girl over at Swagger City posted the very inspiring Will-I-Am/Obama video a few days ago.


All the more funny to me because I swear if Hillary gets the nomination I'm jumping ship and voting for McCain. More than anything else, I cannot do the Reagan/Bush/- Bush/Quayle - Clinton/Gore - Bush/Cheney - Clinton/? thing. I can't. It's unAmerican. We may as well appoint a Royal Family and call it a day, if that's the case. A Bush or a Clinton has occupied the White House for almost as long as I've been in this country.

When rumors of Obama's run first began circulating, I was the first to say it was never gonna happen. Never ever would a man colored a shade of brown get anywhere near the top office. It gives me hope that I was wrong.

Even if he doesn't win the final bid.... or if he does but doesn't make the final cut, it's tremendous to me that he's come this far. And sad... we've been a country for over 200 years, and there has never been a woman president, or a man of any color. This is the closest we've come... and be "we" I mean America. Not just "Black".

Initially, I was all for Hillary, despite my misgivings that she blatantly moved to NY to run for Senator, when she knows nothing of life in NY. I remember being a little resentful of it, actually, wondering what made her pick New York over say, Arkansas, where the Clintons had been previous to the White House. But, she's a chick, and a strong chick, and I have an admiration for strong chicks. But the Harlem thing really bothers me, and I hold her husband largely responsible. Him and Charles Rangel. Looking back over old articles, I really wonder now if there has always been A Plan. The Fat Lady believes that the entire Clinton presidency was a part of Hillary's master plan to be the first woman president. She may be right. In 1995, when Bill was president, he started working with Charles Rangel to create the Harlem Empowerment Zone. It was supposed to benefit the neighborhood. But questions were raised about how the Zone was constructed, what it would actually accomplish. I found this article, and reading it now, 12 years later, it makes me more than a little suspicious. You can read it here. Maybe the Clintons had their sights on New York, on Harlem, all along. Maybe it was a back-room deal made a long time ago.

Others have said--including some Harlem residents--that the changeover was inevitable, and yes, it certainly was. At some point Harlem was going to get to be valuable property, because of it's location and the availability of Mass Transit, and proximity to all major highways. You can get anywhere from Harlem. But the acceleration of gentrification, once Clinton got to 'Two-Five, is alarming. Not even Ground Zero changed over that fast. You'd have to be here to appreciate it. It's disorienting.

I took this picture on my Treo in October, on the corner of 120th and Fifth Avenue, right below the park I still call Marcus Garvey (but which is now very slowly reverting to it's original name of "Mount Morris") 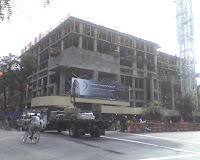 In January of this year, it looked like this: 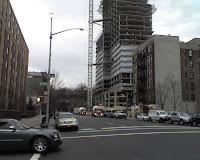 And you can see it as soon as you hit 116th street--from both the east side and the west side: 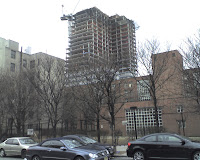 and every time I see it, it breaks my heart. It signifies everything I hate about what's happening uptown; the complete lack of respect for local architecture, history, and community. Thousands of "middle"-to upper-income people will move into that building (with a few units maybe allocated to lower-income folk) who will never speak to each other. Will be shuttled back and forth to the subway station with either their cellphones glued to their ear or their iPods on, never making eye contact with the locals. Never supporting local businesses, putting the oldguard out of business, bringing in chainstores like Whole Foods and Starbucks.

When Clinton first announced his taking an office on 'Two-Five in 2001, a New York Times Op Ed piece stated that "...On many long-neglected urban issues Mr. Clinton's persuasive voice could make a difference -- especially if he picks big targets, the difficult economic, housing, education and health problems that those facing election or re-election often fail to address."

In 2003, we began to realize (to paraphrase Brother Malcolm) we'd been hoodwinked. We'd been had. We'd been took. Been led astray, run amuck. Bamboozled. Clinton was rarely seen, but already the $600 million in private investments that had been attracted to the area were beginning to manifest themselves. The Times quoted a young woman's belief that "...if Mr. Clinton were around more often, he might be able to help her find a job: ''Maybe you could have your people's people's people help me out.''"

Now, in 2008 there are new buildings everywhere. New neighbors. Many of the old neighbors have been priced out. Change for the locals has not been good. There aren't a lot of new jobs in the area, despite what all the "Good News People" say. The new residents love it, but the old residents? I can't see that they're doing much better--I don't see where it's benefited them.

Proponents of the gentrification say that indeed, those in the lower-to-middle income bracket have benefited. But what I find is that the definitions of "middle-income" have changed since 1995. When you see applications for these rehabbed apartments, the minimum income is somewhere in the $40Ks for a family of two. That's reasonable... except if you've been living there all your life and your annual salary is somewhere closer to $23K-$36K.

A 2003 article on The Co-Operators website says "So-called 'middle-income' housing is based on an annual salary of $42,000 in New York City - a figure that exceeds the average Harlem household's income by nearly double. According to the city, rent and mortgage rates can exceed the median income of Harlem by more than 165 percent. Those who moved to Harlem early on in search of their own affordable niche are finding themselves priced out of many blocks - much like the old-timers." When the Professor went looking for her apartment recently, the stated income requirement for her rent-stabilized apartment was 40 times the monthly rent... so if your apartment's rent is $1,000 a month (which is about the average rate for a one bedroom these days), your minimum annual income has to be $40K. According to the University of Toronto's Center for Urban and Community Studies 2006 "Gentrification Report", in the year 2000 the median income for Central Harlem was $19,920. A person's income can double in 8 years, provided they have the right education, the right job, the right skills. But the Professor just barely made $40K in recent years, and she's got an MSW. My own income has dropped by $30K.

So what has this got to do with Obama? Do I expect him to charge in and make a difference? Not really. If elected he'll spend the next 3 years cleaning up the mess that GW left, trying to figure out what to do about our young men (and women) dying in Iraq. He'll definitely have bigger fish to fry, while being subjected to higher standards than your average white President. The fourth year he'll be trying to get re-elected. If he doesn't impress the GOP and the more senior and powerful Democrats, he'll be out and won't get another 4 years. If he gets another 4 years, maybe, if he hasn't turned into a hardened politician, maybe he'll be able to accomplish something useful. But in the end, a politician is a politician is a politician. Yeah, he's a "Black" politician and that's cool (although the lack of NDN in his face fascinates me) and for me that's a good portion of the reason I like him. Oh yeah, and he looks good running through the surf.

But I can't vote for a Clinton.

Not with all the questions I have.
Email Post
Labels: Things That Piss Me the F Off

Julie said…
I agree with everything you say except voting for McCain. Vote independent. Stay home. But don't give that nut job your vote. Please.

Honestly, I think Obama is going to get the nomination. At this point I think it is becoming very apparent that if he doesn't it will create a huge rift in the Democratic party that it will take forever to repair.
February 12, 2008 at 3:15 PM

The Bear Maiden said…
Yeah, but isn't an Independent vote the same as voting for the Other Side? I want to NOT vote to give someone a shot. Not this go round. Besides, McCain is crazy, but uh, so's GW.
February 13, 2008 at 3:39 AM

Unknown said…
Hey Jesi,
Lovin' the stuff of Obama. I've been torn through the election but he's won my vote...Atlantic Monthly had a GREAT article on why the U.S. needs him as preisdent.