The Sun and I love a road trip. I need to learn how to drive. We'd go on road trips all the time. 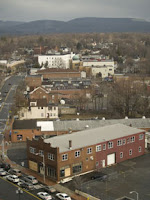 This particular one was to Morristown, NJ, to a karate tournament, held at the Morristown Hyatt. (It makes you wonder why a hotel would decide to build something in the middle of nowhere.) We weren't sure almost until we left, exactly who was coming and who wasn't, but it turned out that four kids (including the Sun) came to compete and two came as the cheering section.

The hotel had offered a discount rate, and unlike at the pow wows, didn't seem to mind that a million people would be crammed into one room. It was a nice hotel, too.

We left Friday at about 9 or 9:30P, and Morristown isn't that far. But we hadn't wanted to try to assemble first thing, risk traffic, etc. We got in about 10, I guess, and we had already reserved three rooms... I had kinda sorted wanted my own room but was willing to share. I got stuck "mama"-ing the teenage girls... and the Sun ended up being in the room with the Senseis and Mrs. Sensei. There were several reasons for this... one being that Mrs. Sensei got wind that one of the parents--the only other parent there aside from me and a couple, was not only charging the girls to drive them to the tourney, but was going to charge them for staying in the room with them. Mrs. Sensei was incensed about that for the whole 24 hours we were all together. So she decreed (definitely the boss in the family... BigBrotherSensei is definitely a ladiesman) that those parents just get their own room and watch their own kid.

It's funny--I had one of those "OH!" moments, because as Mrs. Sensei was arranging people, one of the girls said excitedly "Oh cool! I like her!" when told she'd be staying with me. This particular girl has made me mildly uncomfortable for the last year, cuz whenever I'm around her she STARES at me. I must be a boy mommy. I kept wondering: "What the hell is she looking at?" It never dawned on me that she liked me.

But I was a tad annoyed... I DON'T like sleeping with anyone other than the Sun, and uhm, maybe one or two others (who were funnily disappointed at the arrangement), and the Sun was a little distressed, but whatever. I can roll with the flow. The teenager I ended up sharing a bed with is an older teen, 17, really nice girl and very sweet, and pretty helpful with the younger ones. The rest of the girls are all about MoodMagicBarbie's age, though not quite as moody. But certainly just as giggly and self-conscious about changing in front of other people, so the bathroom line was pretty long.

The OldLady in me noted how times have changed... the hotel had an iPod docking station. Which was great cuz I don't have a wall charger for my iPod.

We went out to eat at the Famished Frog (food wasn't bad... LittleSensei and I shared a plate of oriental styled wings which were pretty good), and then came back to bed.

Those girls not only went to sleep late (luckily I was so exhausted the twittering didn't keep me up for long) but they woke up at the freakin' crackadawn. But they got dressed in good order and we went downstairs to the continental breakfast. Mrs. Sensei cracked me up by relaying that she was afraid that the Sun, who talks in his sleep, and LittleSensei, who also talks in his sleep, would begin to have a conversation with each other--in their sleep. And that BigBrotherSensei, who couldn't sleep because LittleSensei was snoring, woke her up so that she could shake LittleSensei because BigBrotherSensei was afraid that if he did it, LittleSensei would wake up wanting to fight him.

It almost made me glad I ended up where I did...

Lately, it seems the tournaments we've been going to haven't been too big... not a huge amount of competitors but the quality of the competitors has been pretty high. And our kids did well... the Sun took 1st in his age bracket/rank for his kata, even though he was the only kid in the bracket... they had separated the kids by gender (which I hate). But I still think he would have placed because I noticed the judges were very impressed. 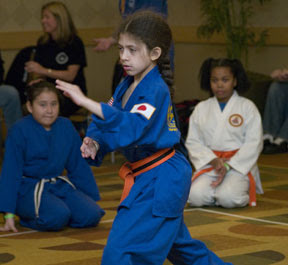 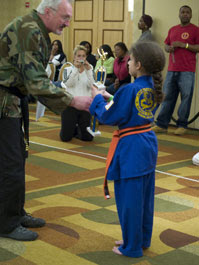 The other little girl in the blue gi in the picture is one of ours, and she also placed, as well as our greenbelt.

LittleSensei got 1st place for Katas and BigBrotherSensei had his first sparring match since knee surgery a year or two ago, and got second place. 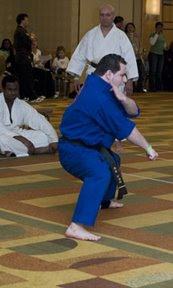 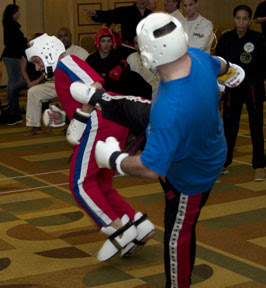 We packed up and left about 4 and the Sun and I were in the house by about 6P or so.

Kind of a quiet weekend after that... today, Bigbear and the Professor came up with MoodMagic Barbie, and we all went to see "Horton Hears a Who" which was actually pretty good. The beginning was fun, and the middle dragged a little for me, but the ending was fabulous. I was almost teary. We stopped in Barnes and Noble so that I could pick up Naruto Installment 28 for the Sun because I promised him and because he's been bugging the hell out of me. And then the Diva called; she had cooked dinner and wanted her mom to come. So I came along.

I had to laugh. Her little place is so cute and bright... much nicer than my dreary-assed first apartment. And it was neat and clean, and she asked us to take off our shoes because she had just mopped. But she positively refuses to accept any help from her mother, which cracks me up. But I'm very proud of my girl. TinyOne, who had been with his father, came home and screeched with delight to see the Sun in his house.

Then the Professor drove us home. I'd gotten a text from TF earlier in the day, asking to have the Sun webcam him at 8P. But at 8P we were still in the Professor's car, so I had the Sun call and tell him we'd be home soon. As soon as we walked in the door, we turned on the webcam and called TF... but he never picked up.

I don't know WHAT the hell is going on with him, and it's mildly annoying. Ok, actually, it's extremely annoying because if the shoe were on the other foot all hell would have broken loose by now. I sent him an email with some pictures from the tournament, and I said that it's obvious something was going on with him, and could he please let us know when he was available to the Sun again? And I gave him our schedule for the next few days.

It's not that I care. And it's not that the Sun cares yet. But we still have a court date and I still need to cover my ass... but I really wonder what the hell he's up to. No, he's not disappearing. Either something has happened in his life or he's changed his game. Either way, it's mildly unsettling.

My Spanish ad for the dojo came out Friday, and it looks fabulous if I do say so myself. And on Saturday, when we got home from Jersey, I had an email from my contact at my old job, who only emailed me to say how great my fliers for them looked. Kewl!

And lastly... it's possible that I may have come into contact with someone who's an awful lot like me. We've had two phone conversations, which were pretty easy, and we've traded several emails (which I love). It's a little freaky though, to think that there may be a male version of me loose in the world. Life could quite possibly get interesting.

And it will have to be, for me to give up on my Nene...
Email Post
Labels: everyday stuff Photos