Sleepless On The Rock Again

...insomnia has kicked in. Last night it was partially due to playing with my new Treo 755 (ooooh.... some things are better than sex) but I think that was just a smokescreen. Playing with the toy kept the voices quiet.

I let the cat out of the bag the other day, but I think it's what's at the core of the sleeplessness. I set a goal for myself, sort of half-assed, but yesterday I decided (well, sort of) that I should go ahead and make it a goal. And it's weird... cuz it hasn't ever been something I decided on before. I want to dance salsa at my wedding, sometime before I die. There are a whole bunch of "never befores" in that sentence, because for instance, even though I was married before, I've never had a wedding. I also don't dance that well. And that short little sentence contains a MULTITIDE of things that have to happen in order for me to achieve that goal.

Up until now I never even dreamed of the white dress and the cake; it was just not anything I aspired to. I never played "wedding games" as a kid, or had bridal costumes. I always played at being "mommy" though. And I always thought I'd have a husband. But the actual wedding thing wasn't a part of the fantasy.

I told the Sun about this goal last night, gaugeing his reaction: "Mommy has decided she wants a husband." "YES!" he said, pulling his fist down.
I laughed. "Why does that make you happy? I thought you didn't want me to be married?"
He said something like "No, I want you to!"
I asked him "well, why would you want me to? Why would it be good for you?"
"Because I'll have somebody to play video games with!"

Ah ha ha. Like that would be my goal... I hate those damn video games. But he made me laugh. I said well, this means I have to start looking. Then after a beat, he named someone we both know (my world is very small) and the irony just made me laugh and laugh. But I told him I didn't really think that was a good option... but hell. You just never know. Regardless, the first thing I'm going to concentrate on is the Salsa part...

The other thing I've decided is that at some point, before I die but hopefully before I'm too old, I want to adopt. It would be nice to actually be pregnant again--unlike the Professor, I thoroughly enjoyed the experience (and I'm totally excited for Halle and J-Hoe)--but I don't really think that's going to happen. There IS a time limit on that. 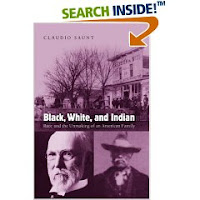 Totally different subject, but I started a book yesterday: "Black, White, and Indian: Race and the Unmaking of an American Family" by Claudio Saunt.

The American Library Journal says "At the center of this family saga is Katy Grayson, a Creek woman, who, along with her brother, had children with partners of African descent. Katy later married a Scottish-Creek man, disowned her black children, and became a slave owner. Her brother, William, stayed with his black wife and children, later emancipating them. In 1907, when Creeks were granted U.S. citizenship, state law split the family by defining some as black and some as white." William Grayson's wife was actually a family slave.

It's going to be a little "dense" going, I think, but already it's fascinating. There's a page that describes how members of the Dawes Commission basically browbeat folks into deciding what race they would be, simply by getting them to describe who was dark or light-skinned, and had "kinkey" hair.

My great-grandmother's grandfather was born on a plantation in Nottoway County, VA. He has the exact same name as his owner with the exception of the middle initial (which he always used), which leads me to believe his "owner" was also his father. He married on that plantation, and then somehow was able to buy himself, his wife and three children out of slavery. The census describes him as being "mulatto", but he is described as having "Black, White and Indian" heritage. Already free when slavery ended, during Reconstruction he served in the Virginia House of Representatives. One of his daughters married the man who would later start the Saint Paul Normal and Industrial School, now known as St. Paul's College. The other daughter, moved north with a husband. The result of that marriage, my great-grandmother, went to Saint Paul's to teach after graduating from a college in New Jersey, and that's how she met my great-grandfather, who was also there to teach.
Email Post
Labels: Native Roots