I meant to reach out to my Homegirl from back in the day; she who survived Bagdhad pretty much in one piece, except for a few extra loose screws up top. She had a few loose before she left, which is probably why she survived. But I didn't get to it; I was busy trying to survive my day. But I thought of her.

Yesterday, I was watching CBS Sunday Morning and there was a feature about Black Servicemen; the Marines in particular. How the Marines didn't accept Blacks until WWII, or the Army or the Navy either. They were celebrating those Black Marines who broke the barrier. I expected the program to mention my grandfather, but they didn't. And I'm annoyed as hell about that, because of all the things Grandpa did, integrating the Army was one of the things he was most proud of. 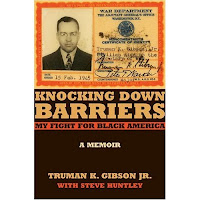 He had been Joe Louis' lawyer, and became his friend. Around the time Joe went into the Army, my grandfather was appointed to President Truman's "Black Cabinet". One of his earliest assignments was to address reports coming from Italy that members of the 92nd Division, a Black unit known as the Buffalo Soldiers, would 'melt away' under fire or 'hide out in cellars until they are routed out by their officers'.

After investigating, my grandfather concluded that the men were poorly trained, and subjected to bigotry and racism all through training camp at Fort Huachuca in Arizona. He got a lot of bad press for that, because Black people felt he he ratted out the troops by even admitting that the troops were going AWOL.

But despite the bad press (which hurt him very deeply on a personal level) he continued to fight for better conditions for black soldiers, continued to insist that the army fully integrate "Negro" soldiers into the regular army, and that they be treated with the same respect as any other soldier.

He wrote his story in an autobiography. I have yet to read the whole thing, but I will. In the meantime, if you want to go ahead and start, feel free.
Email Post
Labels: racism