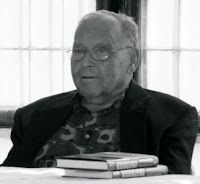 Grandpa's birthday was last week Tuesday, the 22nd of January. He would have been 95. But I was busy looking for the fallout from TF, and Blogging For Choice, and I meant to post something about Grandpa but didn't get around to it.

I didn't realize I missed him until the tournament last Sunday. He would have been "over the moon" (as Bigbear said) if he'd known about the Sun's tournament. Grandpa got a HUGE kick out of the fact that the Sun is half Albanian. He knew of my troubles with TF, and Bigbear would always tell him what TF was up to. As a lawyer, he always had interest in the legal issues, but he was of no help since Family Law wasn't his thing.

He died last December, a month before his birthday. It was before I started this blog, so I never had the occasion to post about him here.

He was born in Atlanta, Georgia in 1912. His father was an all-around scrapper/ busyman type, who ended up in the insurance business and co-founded the largest (at the time) "black" life insurance company, Supreme Liberty. So Grandpa sort of grew up like a prince. He attended Chicago University where he got a law degree. Rather than go through his official biography, you can read it in his obit here.

If you've followed my 1977 adventures, you know already that there was a rift that year, and we didn't see Grandpa regularly for years after that. But when Grandma died, my mother--who had always had a better relationship with him than with her mother--was free to repair that rift, and we went out there to Chicago once or twice a year to see him. The kids loved him.

He was funny as hell, cursed like a sailor and was extremely to-the-point. Though he always identified as "Black"-- and fiercely so, he was real quick to talk about "niggers". Only at the very end did he hint about the Native part. Which cracks me up, cuz boy does the Native part show in his baby face. 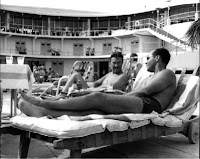 He knew EVERYBODY, or had at least met them once. You'd mention someone and in his gravelly voice and midwest accent he'd go "Yeah, I met so-and-so in 1962 at this-and-that function" and then proceed to tell you what he really thought about that person. He was not at all politically correct. There are pictures of him with Thurgood Marshall, Adam Clayton Powell, Lena Horne, Rocky Marciano, Joe Louis, Sugar Ray Robinson, President Truman. During our last visit he'd mentioned he'd met Obama, and didn't have anything particularly biting to say. Which I take as a good thing. The Diva had mentioned LL Cool J once, and he'd met him. I'd said something about liking rock music and he said he'd done some work for the Smashing Pumpkins.

He was a snazzy dresser, and loved clothes and shoes. He wasn't flashy, but his coats tended to be cashmere and his suits well-made. He was a hard drinker but he held his liquor... even when he was 90 and we'd go out to dinner, 3 or 4 drinks in you couldn't tell he was drunk. He would just get kind of quiet. His drink of choice was scotch--Dewar's or Johnny, with soda on the side. He was impressed that I liked vodka.

He was very independent, and lived on his own until the bitter end. When he couldn't get out of bed on his own anymore, we knew he 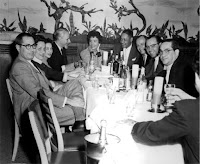 wasn't going to stick around long... it was a matter of months. And loyal... loyalty was a trait he stood by. No matter how he felt about his wife, and though he cheated (um, blatantly) he was loyal in that he never left her. When she went senile and everyone begged him, for his health as well as hers, to put her in a nursing home, he refused, and took care of her until she died. He also took care of his younger brother, as well as his "baby" sister. He was 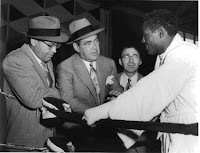 furious that her daughter had put her in a nursing home miles outside of Chicago. About the second-to-last time we'd gone to visit, he quietly and determinedly got my sister to drive out to see her... even though we got lost. He never complained, but turning around wasn't an option. We were GOING to see Alberta THAT DAY... and everyone in the car knew it. We got to her finally, and had a great visit. She died the next day.

He outlived everyone he knew, just about. There were people he did business with and loyalties he had that he never ever discussed and took with him to his grave... But put it this way--at his funeral several "hard" individuals with pinky rings came to quietly pay their respects. 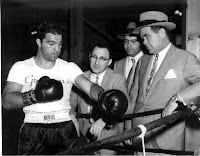 Why he didn't really take care of my mother is beyond any of us... except maybe he knew that my mother, like him, was fiercely independent and would always make it. When he died he left no will... and no money either but also no debt and no estate. We packed up his apartment and that was it.

He was very proud of his accomplishments, and was so proud that he got to publish his autobiography.

Here's some YouTube video about the Joe Louis/Schmeling fights, and there's a glimpses of Grandpa at about 1:55 in the video: 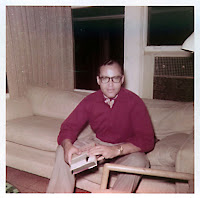 Julie said…
Your grandfather sounds like an incredible man who lived a long, full life. He reminds me of some of the men in my family from his generation. Especially my uncle who will be 90 next month, who has become rather senile and is forced to live with his son for his own well-being - but is alert enough to make jokes about being kept on a leash - because he can no longer drive around and visit his girlfriends - yes plural.

I'm glad that your mother was able to reconcile with him and that you all got to spend time with him in the years before his death - it sounds like his presence really enriched all your lives.
January 29, 2008 at 9:27 PM

The Bear Maiden said…
fat lady, yeah, he was cool, as men of that generation tend to be. I think that was the era of being "manly". Yeah, lol, partially really sexist, but at the same time they knew what the term "gentleman" meant.