Yeah, Fat Lady, you hit the nail on the head. It's a conclusion I've been coming to slowly over the past few years, since I got out of Pratt. It's something I've been heading towards all my life, knowing I was destined for it and not wanting it.

As I get older, it gets harder and harder for me to function in that other world. I could do it when I was younger; could aspire to Brooks Brother suits and matching scarves, pantyhose and pumps. But remember "Men in Black"? Remember Edgar, who's killed by the alien bug, and the bug wears his body as a mask? Remember how Edgar's body, though walking and talking, slowly rotted so by the end the bug was peeking through?

I often feel like that. And lately I've come to the conclusion that despite my best efforts, the thought of taking orders from anyone, the thought of creating any body else's vision--particularly if it's not something I can "see", makes my inner core start to bubble and boil and my attitude peeks through.

The problem though is that I swore I wouldn't do what my parents did; wouldn't be so committed that I would forgo creature comforts in order to keep my soul. But the catch is that it's not something you choose to do. One of my first professors at Pratt, Goode, said to us early in my first semester there; "We don't do this because we choose to. We do it because we have to. We are compelled." And I knew right then that I was in trouble. That I wouldn't be able to fight it for much longer. It's why I struggled to finish Pratt, even though it took Herculean effort. And when I was done with the graphic design track, I knew I wasn't done. I knew I had to go back for illustration.

But at least I have some real-world skills. I just have to figure out how to use them in my own world so that I can keep my soul AND those creature comforts. I may have an artists' soul but I still have expensive taste, dammit. I need those red patent leather stiletto pumps. I've wanted them for years but the cherriest red ones I can find cost bare minimum $300.

(Pause for New Years: HAPPY FUCKING NEW YEAR!!!!! Me and the kid stayed home; we ate his favorite meal, spaghetti and meat sauce, and then we had nachos with cheese, "kid wine"--sparkling cider and banana splits. UpstairsNeighbor gave me some Kahlua, which was yummy, and I had one Pete's Wicked Ale. We're in our Jammies, and life is OK.) 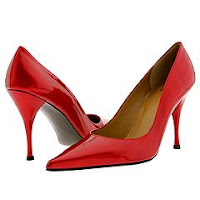 So... here we go. This year I resolve to love someone wholeheartedly who loves me wholeheartedly in return, and figure out how to obtain those red patent leather pumps and still keep my soul and my sanity.

I think those are pretty attainable goals...
Email Post