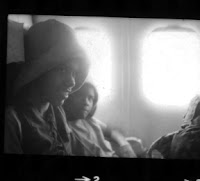 We're Off! *
*my handwriting's jerky 'cause we're on the train.

We didn't sleep till 12:00 am last night. Lisa Caleb, T+I shared a bed. Woke at 6:15am. Dressed, ate breakfast. Then Mr. Caleb's car wouldn't start. But we got to the airport on time. Said "Good Bye" to Lisa and Mr. Caleb. Went through customs o.k. though Pops was carrying Herb. First flight, scary. But after Mo-bay stop, fine. Stewardess fine. Got off at Miami. Customs etc. Met a funny St. Thomas Jamaican cab driver, gave us a room. Went exploring. Came back. Ate supper. Took a bath, went to bed. Thank you, Mr. O. We ate: Yup, Poppy was carrying herb through customs.

I should backtrack a little.

Sometime during the two years we lived in Bull Bay, we'd walked up to 9 Mile to go to market. There was a little clearing where on Wednesday and Friday mornings, fruit and vegetable vendors would gather. When we'd first got to Bull Bay, there was also a sort of supermarket owned by a Jamaican Chinese family. The son, (of course known as "Junior"--there was always at least one "Jun-ya" in every Jamaican family) was one of my crushes. He was very Chinese looking, but with an Afro. Then the supermarket closed, but the bus to Kingston stopped there, and there were still vendors.

One morning we'd gone up there, and in that area Poppy found this backpack and sleeping bag combo. It sat there for several days, and finally Poppy brought it home. There was no money and no ID. The backpack had belonged to some obviously hippie-type traveler--a Fruitarian, judging by the contents inside. Lots of packages of herbs--stuff I'd never heard of like Sassafras and echinacea. We were only familiar with stuff like fevergrass and cerasee. There were also several books about eating raw foods, and colon cleansing and Eastern meditation practices. There was also a man's parka--a heavy-duty hiking-type jammie, and a sleeping bag.

The great mystery of course is... what happened to the guy? What was he doing in Jamaica? How did his bag get to Bull Bay? Was he robbed? Murdered? We never found out... no one ever came looking or asking questions. We assumed he was white cuz only white people did crazy shit like decide to ONLY eat fruit and veggies and stick things up their culo. We assumed that he was probably American or Canadian as opposed to English, because the books were mainly published in America. The funny thing was the police station was right in that area too... but nothing was reported either way. And that area was reasonably quiet... you'd think the police would want something to do. I suppose they had more fun harassing the local Rastas and trying to bust up Nyabinghies (moonlit Rastafarian gatherings with lots of singing, drumming, chanting and use of Ganja) than doing any actual hard work.

The Eastern meditation books and books on diet held no interest (though I became familiar with the name Sri Chinmoy) for the Professor and I--and I read a lot back then, and would happily read most anything. The ironic thing is we pretty much ate a Fruitarian diet anyhow... but that was out of necessity/budget, and not by choice. Given the choice and the opportunity, chowing down on chicken or beef was far more enjoyable than deep breathing and raw foods (still is, in my opinion!!! STEAK! GIMME STEAK!). The parents, though were overjoyed. I remember being thoroughly grossed out by the fact that Poppy washed the parka and the sleeping bag and kept it. "Cooties!" I thought. I couldn't imagine why in the hell he'd want to keep that stuff, seeing as how it was hot in Jamaica. But boyohboy did both those things get put to use later on. And it's very ironic that we were touched by this brush of "Western Civilization" long before we were aware that we'd soon be back in it.

But the herbs... there were so many different kinds, and the Parents put them all in separate jelly jars and we used them. When we were packing up, Poppy stuck his "Herb" in one of the jelly jars, and stuck the jar in the box with all the other jelly jars. The immigration people escorted us directly to the gate, I remember. At customs they of course made him open the box, looked at all the various herbs and barks and roots.... and just let him through.

Can you imagine? We still giggle about that.

"SEEYA! Get the FUCK out! We don't CARE if you have jelly jars full of shit. GET THE FUCK OUT!" I also vaguely remember at some point Poppy told us we'd been told that we were an embarrassment to the Jamaican government, since we had gone undetected for so long. They didn't care if we came back tomorrow but we were GONNA leave TOday.

And so thirty years ago today, we boarded Air Jamaica from Kingston and landed in Miami.

I remember the air feeling different... much more "tacky" and heavy. The houses and palm trees were similar, but the roads were wider and there were SO MANY CARS. We amused ourselves by counting Volkswagon "luv bugs" on the highway but lost track after awhile. I remember the room being seedy, and remember thinking the cab driver (and by the way, St. Thomas is a parish in Jamaica, in case you don't know, and Bull Bay was a few miles west of the border) would become a constant, but we never saw him again.
Email Post
Labels: 1977 Added Photos Tales From La Vida Low Budget

professor said…
yeah, that day sucked...it was the beginning of all my anxieties...to me it was NOT a fucking adventure, it was torture!!! but the parents made it fun, and they always gave us the best, and they did make it as fun as they could...
August 31, 2007 at 11:49 AM

The Bear Maiden said…
I realize now it sucked for you and I'm sorry. It wasn't AS bad for me, cuz I'd already been through it. Twice. Leaving Paris was a little more traumatic to me than Jamaica. I guess by then I'd learned to trust the crazy parents. But we couldn't have stayed in Jamaica much longer. I'm convinced we'd be a lot more abnormal than we already are! Ha ha!
August 31, 2007 at 12:52 PM

professor said…
DO YOU SEE THE PETRIFIED LOOK ON MY FACE? do I look fucken happy to you? NO!!! I just left my dog, my animals, and all my belongings!!! but you are right, I don't know where it would've gone...if we continued to live like that I would REALLY be antisocial and totally weird...
thirty years, and look how far we've come...I guess it wasn't the worse thing that could've happened to us...we did turn out ok...I guess
September 1, 2007 at 2:32 AM