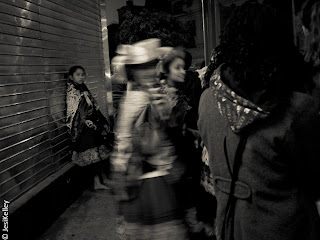 But I am glad I live where I do now, though I could almost almost live here. Almost.

Lima, where we have spent most of our time with the exception of the 18 hours plus travel we spent in Chincha, is a strange mix of old and new, efficient and inefficient.

There are lovely old homes and incredibly futuristic looking buildings. There are efficient roadways and speedbumps but insane driving. There is great food but hardly any vegetables. They are amazingly aware of the ecology by conserving paper, plastic and using fluorescent bulbs, but they use a lot of diesel and the air quality is horrible. Sometimes my throat burns and my asthma has been a little weird by my allergies are nonexistent.

People are poor mostly compared to home, and don't seem to have personal computers or internet and I don't see a whole lot of folk with cell phones... but who really needs it because there are internet cafes on every corner and it costs 1.60 soles--less than .60 American cents for an 11-minute call to the US. Fifty centinos--less than .20 cents for 15 minutes on the internet.

I don't see a lot of people smoking cigarettes either, but smoking is allowed everywhere, and there aren't a lot of bars but there are pharmacies on every corner. Sometimes two or three.

I heard healthcare is bad and expensive but the pharmacies sell antibiotics freely.

There are no leash laws but no poop on the streets, dogs run freely but are as polite as the people, and I don't see cats. OK, I saw one. And our FearlessLeader took the kids to Miraflores today and came upon a park that was also a sanctuary for stray cats.

They don't refrigerate their eggs, even in the supermarket. But I wonder if they even know what salmonella is....

There are pet clinics everywhere, but they eat a revered American pet--the guinea pig. They call them "cuy". I also found out that cuy are the symbol for life.

The cars are mostly modern... I've seen a lot of Rav 4's and Nissans, but I have seen more Volkswagon bugs than I have ever seen since my childhood. It's like every VW LoveBug America ever threw away ended up in Lima.

It makes me realize how much America throws away. We went to a chain restaurant the other day, for pollo y papas fritas (chicken and french fries). The chicken was (finally) the spit-roasted kind and was really juicy and good... but the waitress didn't bring out napkins until AFTER everyone was done. And how American napkins are one large square folded in fours? Peruvian paper napkins are that one small fourth of an American napkin. They recycle soda bottles... Inca Cola ("el sabor de Perú" which is everywhere here--and while available in the US it's still made here with sugar) bottles are smoothed along the ridges like beach glass. Even beer comes in recycled bottles.

There is very little garbage in the streets. Even in the seedy parts.

And good God but Americans are SO wasteful, throw SO much away. It amazes me that people bitch about old cars breaking down and falling apart, and there are cars here on the road almost as old as I am...

There are cacti and palm trees every where but right now it's winter. The sun is out maybe 3 hours a day if you're lucky, most of the time hiding behind mist. It rarely rains but everything is damp.

And it's fascinating to me to see the racial breakdown, since all of the same players started here as they did in North America, but it all ended so differently. The Afro Peruvians are discriminated against, they feel... but nowhere here has anyone been dismissive or disrespectful to the Afro Peruvian we are traveling with, the way they blatantly are disrespectful in America.

So.... that's only the tip. There are all kinds of feelings and things bubbling, but I'll need some space and time to process, along with the 1,000 or more photographs I've taken.

I miss my BigMan, my cat, Upstairs Neighbor and the family... It's hard traveling with people who aren't family, too. Although out of this there are some people I've truly come to like and some I could truly do without...

The Sun has enjoyed a fair amount of freedom on this trip--he isn't rooming with me and I almost feel like I haven't seen much of him.

I'm tired though, and I want to come home... at least for the warmth. I'm tired of being cold when I know it's summer in smelly New York. But I'll be home Friday... God willing... and then I get to see where my life is really going...
Email Post
Labels: culture defragging