on Monday, the Sun and I were. It's why I didn't get to post. I wish I'd had the time to post the details earlier, before I felt like shit, cuz we really had a great time. 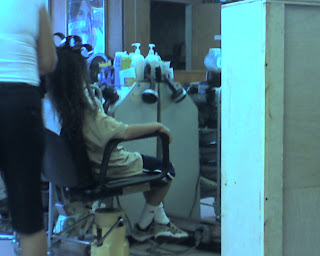 My mobile blogger hasn't been acting right so I couldn't post the picture from my phone... which was of the Sun getting his hair done. He'd had box braids for two weeks, and they had gotten nasty. So Sunday night I took them out, but it got too late to wash and tame the beast so I decided that since I had to go get my hair done, I'd take him too. Let the Dominican lady tame that beast.

And tame it, she did.

She had this yellow de-snarler brush-thingie, and while it took her a minute to get the snarls out, she did, and the yellow de-snarler brush-thingie actually worked. Then she wound strands of hair on HUGE rollers... the size of beer cans, or larger. Then she stuffed him under a dryer, where he sat for a little over an hour. As the FatLady remarked, hair dryers are much more powerful these days, and the Beast Tamer sat the Sun under the "hot dryers" in the back. The ones I usually sit under when I'm in a rush. He had these pink ear protectors and his DS, so he sat there calmly the entire time.

Then, she took the rollers out and blew the hair straight with a blow dryer. That took at least a half hour (with me it takes about 10), drawing a small gathering of ladies in the process. I was beginning to freak out because he had to be at Opus at 3P, and it was like, 2:55P but the Beast Tamer got it done by 2:58P. She worked so hard and so fast, I gave her a $15 tip over her $30 charge. Cuz me? There's no way I could have done that.

We made it to Opus by 3:06, having jumped in a cab to take us what, 5 blocks. A sin, cuz we could have walked it but we needed to get there. When we walked in, a hush fell over the kids assembled... no one has ever seen the Sun look "sleek". In fact, LilacBlue started calling him "Fuzzy" in school, and now everyone does. Yesterday, I called him "Smoothie." 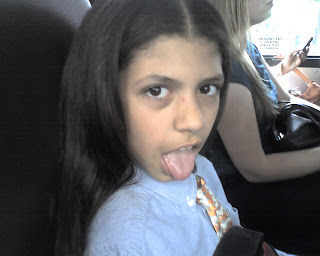 At 3:15P, we got on a school bus, which took us down to the World Yacht Dock and we stepped over into fanciness. It was almost as if we were in the wrong place... white linens, real silverware and glasses, flowers on every table, white draped chairs with organza bows. Us parents looked at each other asking "this is the kids section???" Then we got a look at the swanky section, where the rich and famous would be, and the difference was quite clear.

Alan Alda wandered onto our deck, looking for his table. A parent said "I think you belong downstairs" to which he replied "no, no, we're at table 8". Uh, yeah, but not THIS table 8... the one downstairs. I said to him "It's not that we wouldn't enjoy your company, but there's a much nicer set up downstairs" and I walked him to where the stairs were. Really nice man... tall, white haired. He looks EXACTLY the same in real life as he does on TV... he's not stooped or particularly wrinkled, no entourage and a completely relaxed aura. I was always a fan, but after my brief encounter, I'm REALLY a fan.

The kids had a great time. The drank Shirley Temples and (virgin) Pina Coladas and pretended they were grown ups. 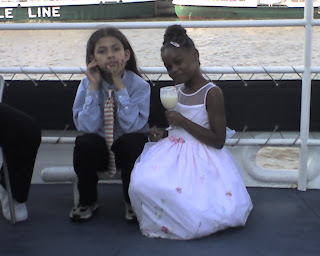 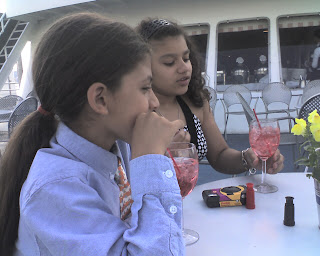 They got called down for a dress rehearsal, which was the only time parents could get close enough to get pictures: 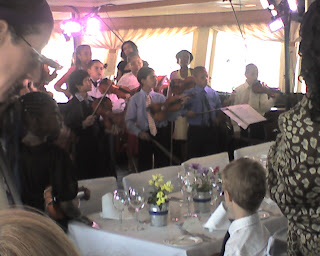 ...cuz when the kids actually played us parents had to stand at the rear of the dining area. We couldn't see a thing. But they played beautifully, like they always do. I have to say... Roberta may be formidable, and not exactly "warm and fuzzy" but what she brings out of those kids is remarkable. What she is able to expose them to, they will carry with them a lifetime. I have the utmost admiration for her. And she can be a tough cookie to deal with...

Kyle Massey from Nickelodeon's "Cory In The House" was there with us in the kid's section, as well as his brother Christopher from "Zoey 101", to entertain the kids as the celebrity guest. Holly Robinson-Peete and Chris Rock's kids were supposed to be there, but they bagged... "scheduling conflicts". For kids? Whatever.

Me, who doesn't watch these things, wasn't sure till just now who was who and what shows the Massey boys were on, but they were both there. Both very nice, grounded-seeming kids and most of our kids while impressed gave them personal space. Well, except for one. She's not one of "ours"... I don't think she goes to any of the public schools where Roberta teaches, but she takes classes at Opus. She's got to be about 14. And I'm not about bashing folks... least of all kids but goddamn if she wasn't blatantly trying to get picked up. Everywhere Kyle was, there she was, invading his personal space, showing off her violin skills (which are pretty good... but there are about 3 other Opus kids who play rings around her), leaning over him. What's worse was that her mother, who is definitely a stagemom-type, positioned herself so as to block anyone else from interrupting. As a woman, it was downright embarrassing. As a mother, it was embarrassing. It was so bad that other parents were commenting on the behavior of a 14 year old girl. And it annoyed the crap out of the other teenage girls there, because as long as "Sparkles" was there, nobody could even get so much as an autograph.

Moodmagicbarbie was there, accompanied by Bigbear as her chaperon. MMB looked beautiful; had picked her own, slightly punkish outfit and accessories. She's a funny kid. She feels like she's lived in the Diva's shadow for so long, but she really hasn't. She has always been her own, very solid little world. Her eyes are always watching, always seeing. She took a long time for me to get to know as a baby... she doesn't let you in easily, just like her auntie. And if you piss her off those gates come crashing down, just like Auntie's. And she was really pissed off at Auntie when the Sun came along, even though she loved him. TF used to be afraid of her: "You watch her. She's jealous of the Sun and I wouldn't put it past her to do something mean." And I wouldn't either, except I always knew that despite her being pissed off at me for supplanting her with the Sun, she knew the Sun was her baby. And he was... still is.

I didn't take any pictures of MMB, not even with my phone, and missed her playing guitar up on the upper deck where they were serving cocktails. She was mad because nobody clapped. I told her it meant she was so good they just figured she was the background music, and not some 13 year old kid. I've done bar gigs at cocktail hours... people rarely clap.

I think that MMB will ultimately be a bassplayer... she has that "lowslung" watchful look bass players have.

We cruised till about 10. Bigbear managed to hold it together despite some early seasickness. After the kids performed, at 7:45, I was about ready to go home but we were trapped and I couldn't go anywhere; it was freezing inside the cabin and the deck would have been beautiful if it wasn't quite so breezy, and the parent chaperons weren't allowed to "wander" without being herded back to the "kids section". I managed to get two "real" pina coladas, and the food was OK if you like chicken fingers, and I enjoyed the hell out of watching the kids be grown so overall, it was a good time...
Email Post
Labels: everyday stuff Things That Amuse the Piss Out Of Me

Carrie said…
Very impressive Jesi. Roberta sounds like dd's choir director -- formidable and intimadating, but ultimate a great teacher and able to make the kids amazing performers. And I think that kids need that kind of leadership, as much as they need 'warm and fuzzy' leadership too.
June 4, 2008 at 5:49 PM

Julie said…
Ah, see, I don't know as much as I thought I did. I never made the connection between Kyle and Christopher! Sugar was surprised when I told her they are brothers - she insists they look nothing alike.

It's funny seeing fuzzy all smooth. His hair felt so good all straight that I couldn't stop touching it. Uh oh - watch out for that - you know some girl is going to get lost in all that hair. When he starts insisting on wearing it like that - start looking out for that streak across the living room!

Really, I'm so proud of the kids!!! Seeing all of them acting so goofy on the day to day, it's always nice when they pull it together and show how well they sparkle.
June 5, 2008 at 9:56 PM

The Bear Maiden said…
Carrie, it's extra-cool. And I think the Sun thinks so, too.

T- I dunno. I heard the term once and in the context said it seemed to mean "rich and famous". But loosely translated, it seems to mean "peanut kisser". And LOL... the kids were acting like those drinks were the real thing.... couldn't tell them they weren't grown.

And FatLady, I laughed when I looked up who Kyle and Christopher were, cuz I thought of Sugar. And she's right...... they really don't look anything alike. But when you get close, they do favor each other a little.
June 6, 2008 at 3:35 AM